mmckenna said:
Use the "Frequency Coordinator" tab here to find one:

[tabs] Licensing Individuals or entities desiring to operate on frequencies listed in the Industrial/Business Pool are required to obtain a radio station license for these frequencies. The Commission has accepted a list of channels in the 450-470 MHz band designated for low power use. The list...

You will need to pay the frequency coordinator, and that can be a few hundred bucks for one frequency pair. Unless you have filed for these types of licenses before, there can be significant value in having the coordinator do it for you. That can prevent a lot of headaches.

Make sure you license not only for your repeater (FB2) but the radios (MO), and license for simplex operation on your repeater output frequency.
Click to expand...

medic9351301 said:
SADLY IT WILL BE FIXED IF THE HAVE A CONTRACT . ITS UP TO THE MONTGOMERY METRO TO FIX IT. VERY DOUBTFUL IF THEY COME OFF THE SYSTEM. MAKES ME WONDER IF THE FIRE KEPT VHF RADIOS IN THE ENGINES ETC . OR MAYBE THEY HAVE THE OLD VHF HT . SINCE AUBURN DOES NOT OWN THE SYSTEM ONLY THE RADIOS. I CANT SEE THEM PULLING THE NEW TRUNKED RADIOS OOS. AND GOING BACK TO VHF,
I HATE TO SAY BUT AUBURN GOT SCREWED. THEY SHOULD HAVE PUT A TRUNKED RADIO IN A FLOAT CAR TO TEST IT OUT.
Click to expand...

I have noticed every police vehicle do not have a VHF 1/4 band whip anymore only the black low profile round 700/800 antenna
My stepfather was a captain at OPD over the radio system and has the numbers up to 2013 when he retired. I was at the 4/2/19 Council meeting and brought up several issues in my 5 minutes, the former public safety director says they tested radios in areas that the VHF WT's had a hard time getting out and they were pleased, he said reps from the PD and FD agreed that this was the best system. I brought up the Alabama Interoperable Radio System (AIRS) and that Opelika is on it (at the time it was called the Alabama First Responder Network) the former director said Opelika has spent millions in just upgrades to keep their system up which is a lie, I have the exact numbers the system cost and what the tower with antennas cost and the cost of the maintenance contract. My stepfather was a captain at OPD over the radio system and has the numbers up to 2013 when he retired. My stepdad gave me the exact costs of OPD's system from the initial build to rebanding including replacing one antenna hit by lightning burning 2 feet off of it reducing coverage by 20 miles, they spent 85K to replace that antenna.
The man promoted to captain to take my stepdad's position in Special Services told me he approached Auburn and offered to build a tower or lease space on a tower in the "trouble" spots and they had more than enough talkgroups for APD and AFD. But Auburn turned them down, Lee County has a TG Auburn had TGs when I was a dispatcher at OPD, they were never placed on active. On Auburn game days I had to patch LCSO Tac West, OPD Events TG, and State Net 155.010 the Montgomery PD officers had to use the State Net patch to their radios with APD's second system at the university PD substation antenna.

When OPD built the system 15 years or so ago APD and Lee County said they would go on it but both backed out and OPD already licenced far more 800mhz frequencies than just OPD needed.

The then public safety director said the VHF WTs had a hard time getting out when inside a building, he could not wrap his head around the fact 700/800mhz has far more penetration, in fact, the FCC had this to say: "The 700 MHz Band is an important swathe of spectrum available for both commercial wireless and public safety communications. The Band consists of 108 megahertz of spectrum running from 698-806 MHz and was freed up as a result of the Digital Television Transition. The location of the 700 MHz band -- just above the remaining TV broadcast channels -- gives it excellent propagation characteristics. This allows the 700 MHz signals to penetrate buildings and walls easily and to cover larger geographic areas with less infrastructure (relative to frequencies in higher bands)."

He could not understand the tighter frequency spectrum has better penetration, TV signals penetrate buildings and over 1000 TV stations are moving to new frequencies, in fact, today a helicopter removed the antenna from WSFA-TV 12 from their 2,000-foot tall tower to replace it with an antenna to broadcast on RF channel 8 virtual still 12.1-12.5

The city manager and then public safety director blew a lot of smoke to the council but I did get the proposal tabled and removed from the 4/2/19 agenda, only to have the next meeting with those two blowings Harris's smoke about how much better Harris is, I don't believe they got better reception off a demo base on the ground to the far side of the PD jurisdiction.
A

Auburn Fire dispatch is back on vhf temporarily while they work out the kinks on the mobile radios.
E 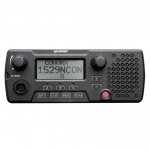 XG-25M Features
Operating Modes
From the XG-25M Operating Manual:
10.30ENCRYPTION In the OpenSky network, both data and voice use a 128-bit or 256-bit key encryption standard published by the Federal Information Processing Service (FIPS), called Advanced Encryption Standard (AES). AES is approved by the U.S. Department of Commerce for encryption of classified materials. When encryption is enabled on the network, data is encrypted from the MDIS to the Mobile End System (MES) (e.g., XG-25M mobile radio). This form of encryption provides air-link security. A network administrator selects the talk group to be encrypted at the interface to the UAS. Once the talk groups have been selected and identified as secure, credentials for key generation are generated automatically by the system and provisioned to authorized users. This process requires that authorized users login to the network and be authenticated. Encryption keys require no manual handling and are never sent “in the clear” over any network interface or air-link. If a user is engaged in a call on a talk group encrypted at the network administrator level, “Secure Call” appears in the bottom line of the dwell display if the user is logged in to that talk group. If a secure call is in progress elsewhere and the user has not logged in, the bottom of the dwell display alternates between “No Access” and the alias of the radio that is currently engaged in the secure call.

NOTE: Both AES and DES UKEKs can be contained within the same UKEK file.

NOTE: Once the KVL Device is connected, a keyset is established whether the keys are loaded or not. You must zeroize to bring the radio to a fully zeroized state.

2. Press the radio’s MENU button.
3. Scroll through the menu to select the KEYLOAD option and press the MENU button to activate.
4. Scroll through and select the KVL option and press the MENU button. The radio can now accept keys from the KVL Device. A.1.2.4 Load Keys Using Motorola KVL Device Type 3 Digital Encryption Standard Output Feedback (DES-OFB) and Advanced Encryption Standard, 256-bit (AES-256), encryption methods are supported. The Type 3 Encryption keys are loaded via a Motorola Device using Telecommunications Industry Association (TIA)/Project 25 (P25) key fill device protocol. Make sure that valid keys have been created and stored in the KVL Device before proceeding.

APD is using the newer XL-150P Portable Radios, far more advanced than the mobiles, the LTE technology for FIRST-NET is still a ways away according to a source in Montgomery in the Governor's task force who has been planning the 700mhz band roll out to allocate each of Alabama's 67 counties designated frequencies.

With only Montgomery Metro Communications Cooperative District holding out until the legacy EDACS system was costing more in repairs and failing microwave links with dead spots in the southwestern part of Montgomery County, they got millions in grants and the City of Montgomery and Montgomery County chipping in a small share with the grants to build the Phase 1 Harris system with a tower in the southern part of Montgomery County adding all the VFDs with their own TGs but most of the VFDs still use the UHF AL Forestry Fire Repeaters installed in nearly every county, even Pike Road VFD with the huge tax base there still uses the UHF system.
I will update this post as I get more info, I have been told by a knowledgeable an Auburn University post-grad computer science and software engineering student has been able to use an SDR with modified software code to decrypt the TG POLICE MAIN and I heard a recording of radio traffic of APD responding to an MVC with a 10-55 subject (intoxicated driver either alcohol or drug impairment) recorded last week. Now if just by chance the encryption was off while working on the Auburn Fire Division radio problems, encryption can be "switched off" by Over The Air Keying from MMCD's facility due to the interconnection of the sites this audio was recorded at 2 am or so, looking at the APD media log I get emailed every morning it did coincide with a DUI arrest on the date and time stamp on the recording played for me this morning.
XL-150P Single-Band Portable Radio 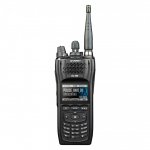 The XL-150P is the first Land Mobile Radio (LMR) in its class with a built-in LTE option, Wi-Fi®, Bluetooth® and GPS. This single-band, highly-affordable solution is AT&T and Verizon Certified and FirstNet Ready™.
Single-band LTE P25 LMR
The XL-150P delivers industry-leading, loud and clear audio powered by advanced noise cancellation technologies and a 1.5 watt/4 watt max amplifier with dual speakers. Bluetooth integration with leading Self-Contained Breathing Apparatus also improves in-mask audio quality for fireground communications.
Compact and ergonomic controls and full keypad are shaped for fast, easy, gloved-hand operation. The XL-150P features encrypted voice and data and comes bundled with an antenna, battery, belt clip and single-bay charger.
With industry-leading technology at your fingertips, you have more ways and more places to connect–in a rugged, familiar form factor you already rely on. Interested in learning more? Contact us today for a hands-on demonstration of the XL-150P.
Key benefits