Hello,
I am looking for suggestions for a suitable stubby antenna for bcd436. Preferably 800 1/4 wave range.
I found one on Amazon but the sma connection on the antenna was too deep that it did not make sufficient contact with the radio for consistent reception and was practically useless.
If anyone is aware of a stubby antenna (preferably 800mhz but any suggestions welcome) I would appreciate it. Thanks!

This is the best antenna for the SDS100, so I imagine it would be ideal for the BCD436. I don't know if you'd call it "stubby," but it's not very long. I've been using it for a few months, and actually it works just fine on UHF and VHF comms too!

It's called Remtronix, and here's the link: 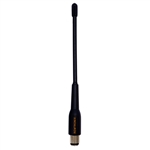 The ~3" length is desirable. I have many antennas that work fine but I'm trying to shorten the profile of the unit from a long antenna
R

I've used the Optoelectronics DB32 for years on a bcd396t and now on my sds100. It works really well for me. I switch between the Remtronix REM-820S and the DB32 and see little difference. I mostly scan 700 MHz with it. I love the small size.

I've already used the included SMA to BNC adapter so I could use some of my stubby antennas.
Of course by the time you add the length of the adapter into the equation, the overall length is getting longer again. Plus that creates more of a chance at snapping off the radio's SMA connector if you bump the antenna hard or drop the radio.
A proper SMA stubby would be ideal if it took advantage of the water seal which adds some strength to the SMA connector as well.
The DB32 is nice but it's not really designed to work correctly with a radio that uses a recessed SMA jack like the SDS100 has.
The DB32 does work but there can't hardly be any contact with the center pin. You can test that by putting you SDS on a NOAA channel and listen while you screw the DB32 on. On my SDS100, the NOAA signal does not pop up to full strength until maybe the last half a turn just before the DB32 is tight. With a proper fit antenna, full signal is reached with two turns left at minimum.

This one can be angled (wideband): https://www.protelecomsupply.com/sierra-wireless-penta-band-monopole-antenna-sma-male-tg-09-0113
H

So I don't know if this is a common issue or not on the BCD436HP, but the Remtronix REM-820S antenna that I got doesn't screw all the way down. It screws down to a point and I can receive things. I did try shimming it with a stainless steel washer to close the gap, and while it worked it didn't look right, so I took it off.

Get a BNC antenna, and use a SMA-BNC adapter fitted to the radio. Changing antennas is easier, proper connection is assured, and you cut down on wear on the SMA connector.