I recently wrote a review of the BTECH GMRS-V1 handheld radio for my club’s forum, and after using it for a few months I would like to share my thoughts here as well. The original review can also be read on my blog.

I was in the market for a handheld GMRS radio to be used primarily for outdoor recreation – mountain biking, camping, hiking, fishing, etc, I had a few requirements of the radio before purchase: the radio should be affordable (< $100), have keypad programming, have a lightweight and compact design, and most importantly, the radio should be FCC Part 95 certified. After scouring the interwebs and reading about all sorts of different HTs, I settled on the BTECH GMRS-V1 (FCC ID: 2AGND-GMRS-V1): 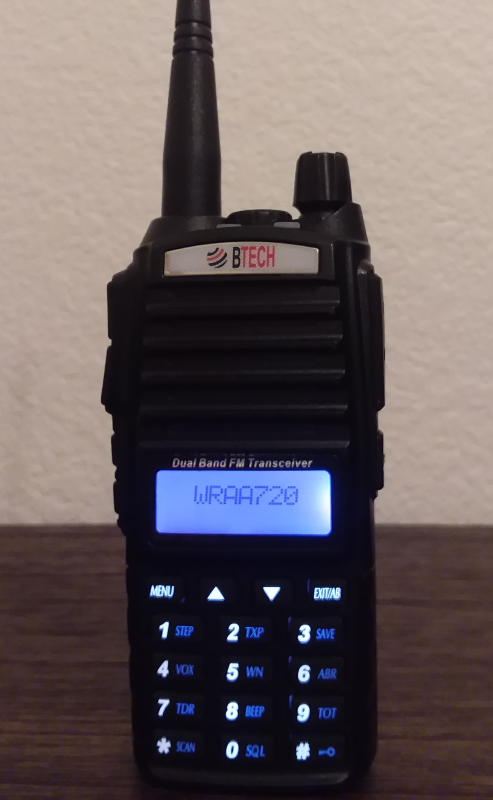 The cheap Chinese radios that have flooded the market in recent years have elicited mixed feelings from hams and other radio folks, so I was a bit skeptical at first. Because some of these radios lack any type-acceptance and can be capable of transmitting all across the VHF and UHF spectrum, they are often associated with illegal activities – on both sides of the law. But the BTECH GMRS-V1 is not one of them, it is a purpose-made GMRS radio. It is actually a Baofeng UV-82 re-purposed for transmitting on GMRS frequencies only. GMRS Channels 1-7 and 15-22 are hard coded into the transceiver. An additional 8 channels with a +5 MHz repeater offset are also hard coded into the radio. Here is the complete list of pre-programmed frequencies and channel assignments in the radio:

Per the recent FCC updates, GMRS now falls under Part 95E and an updated firmware is programmed in the latest versions of this radio. This will update the channel assignments in the radio to include the 7 interstitial frequencies in the 467 MHz range. This will give the radio 30 total channels, per the new GMRS channeling assignment. These additional channels transmit at 0.5 W. A minor bug fix is also included, where channel 1 now appears in row 1 of the programming software as opposed to row 0 with the previous firmware version. The small channel number in the corner of the LED display on the radio will now indicate the correct updated FCC GMRS channel assignment.

Programming this radio is done via the keypad, the manufacturer’s software, or via 3rd party software, CHIRP. The manufacturer’s software works, but is a bit clunky to use. I had zero issues programming this radio using CHRIP and Kenwood-style Baofeng programming cable. Unlike some of the newer Uniden GMRS offerings, this radio will do split TX and RX tones. The included user manual for this radio is actually useful, unlike some Chinese radios. The manual was written in English (not translated) and clearly explains every feature of the radio. Some reviewers have reported the user interface to be unintuitive and/or difficult to use compared to other manufacturer’s radios, but I did not find this to be the case. I’m the type of person who always RTFM, so I had no problems getting up and running with the radio very quickly.

The fact that the channels are pre-programmed and cannot be modified can be a turn-off to some users, but this appears necessary to gain the FCC Part 95A certification. This is not a huge drawback for me, however. When I’m using this radio I’m usually just on a single channel for simplex or monitoring a single repeater. The TX and RX tones can be easily set from the keypad, and I’m ready to go. As far as the construction of the radio goes, it is made of plastic, but it does feels solid. There are no parts on the radio that look particularly cheap or may easily break. The belt clip could maybe be a little beefier, but it works just fine. It’s definitely not heavy duty like a top of the line Motorola HT, but I think this radio could survive a couple falls to the ground should I drop it or it pops off my backpack on a bike ride. And if the radio does break, I’m only out $50.

Radio performance I’ve found to be excellent. Reception with the included antenna was surprisingly good, though audio does get a bit distorted at the highest volume. I was sitting on top of a butte in Papago Park in Tempe a few weeks ago, monitoring the PHX 550 repeater with my Uniden BC125AT and the BTECH GMRS-V1. The Uniden scanner has a fairly decent antenna, a Diamond dual band high gain antenna, but the 550 repeater would often not break the squelch. The GMRS-V1 however, was receiving the 550 repeater loud and clear all over the park. Transmission was also equally impressive. From the top of South Mountain I was easily able to hit all the area repeaters. I have received signal reports from a few AGRC members and others that my transmission was loud and clear. The HT also works surprisingly well from inside my truck. With a relatively clear line of sight to the White Tanks from various spots on the freeways, I’m able to transmit and receive from the 550 repeater with ease. Outside the vehicle at ground level the radio also performs well, though as with all VHF and UHF radios, a clear line of sight is best. Battery life is excellent – I took the radio camping for 3 days, using it for several hours each day and did not need to recharge the battery during the trip. Other reviewers have tested the power output, and verified it is putting out the full 5W as advertised on high power. Low power is said to be at 1.8W. See miklor.com’s review.

A feature I enjoy on this radio is the dual display. The radio has two PTT buttons and can be configured to monitor two frequencies simultaneously, and transmit on either frequency using one of the PTT buttons. I prefer to use the “Display Sync” feature, however. This allows the radio to display the channel alpha tag on the top line of the display and the frequency on the bottom line. Pressing either of the PTT buttons will transmit on the single frequency. The GMRS-V1 also has 105 receive-only VHF/UHF channels that can be programmed with any frequency. I like this feature, but I don’t have much saved in these channels other than NOAA weather frequencies. The scan feature on this radio (and many other Chinese radios) is pretty slow and leaves a lot to be desired. I don’t make too much use of this, but the flexibility to store additional RX channels is nice. Perhaps the most annoying feature of this radio is FM broadcast radio receive capability. This is accessed my pressing a button on the side of the radio, but I noticed I would sometimes accidentally hit this button when I meant to press the monitor button right next to it. Fortunately this feature is easily disabled via the CHIRP programming software.

Overall I’m impressed with this radio, it has so far proven to be reliable over the last couple months and I'm most impressed with the long battery life. It’s definitely not a cheap toy/bubble pack radio, and offers a great bang for the buck. I’m getting great reception and transmission, I didn’t break the bank, and I won’t be too upset if I smash the radio after wiping out on my bike. Definitely would recommend! Here are some more photos of the radio: 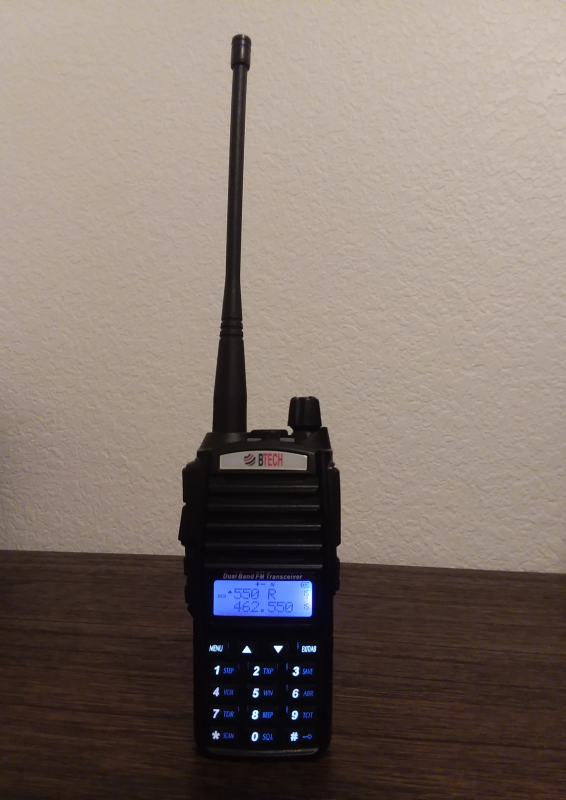 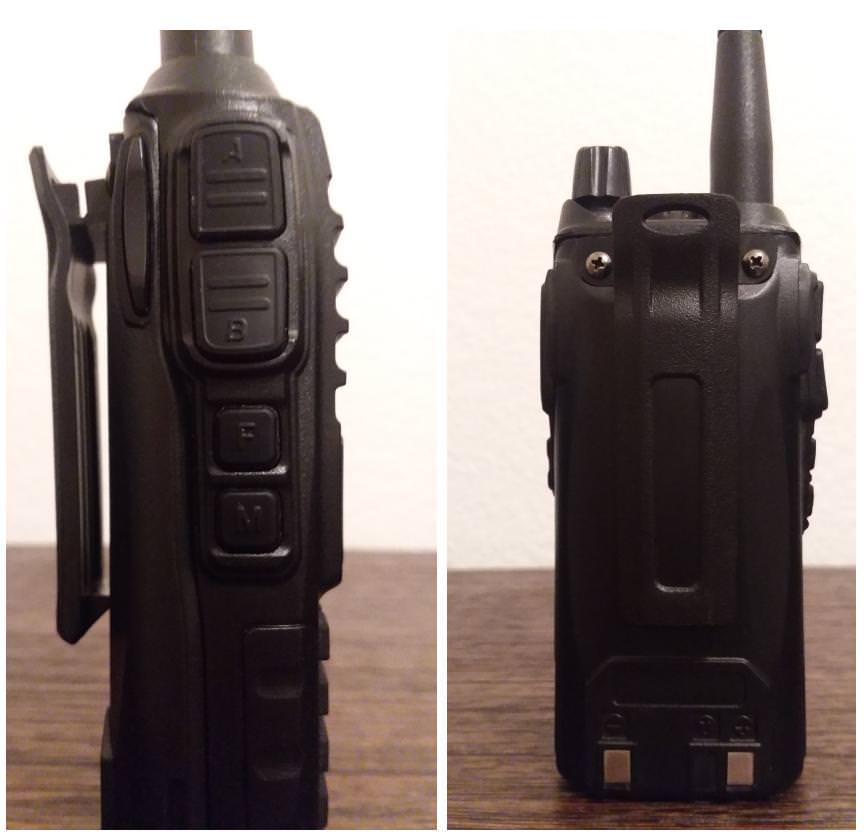 Here are some links with additional info about the BTECH GMRS-V1:

Purchased a pair of these a few years ago and these radios have no downside in my opinion. I chose them for their repeater capability and the fact that they're GMRS only, with FCC certification.

You can also use it as a scanner for VHF and UHF, but I have not tried this as I have a scanner already.

The manual is excellently written, most probably by someone very familiar with two-way radios, perhaps a ham or someone very experienced in the radio business.

The radio covers the FM broadcast band also, and NOAA wx stations come in very clear with only the supplied antenna.

On high power, with only the supplied antenna, the range is amazing.

Thank you for the firmware update info, I will check with Miklor if older versions can be updated.

spongella said:
I will check with Miklor if older versions can be updated.
Click to expand...

I did message him a few months ago regarding this. He indicated that the radios have a one-time programmable chip, and the firmware cannot be updated. I do agree that the supplied antenna is quite impressive. My handheld BC125AT with a Diamond antenna can't always hear distant stations nearly as well as the GMRS-V1 when I'm on a mountain top.
Last edited: Dec 26, 2017

I posted about about my GMRS-V1 recently in the GMRS forum, but just wanted to include a quick update here as well. Using the stock antenna on this radio, I was able to hit the Arizona GMRS Repeater Club's PHX 550 repeater from 75 miles away: 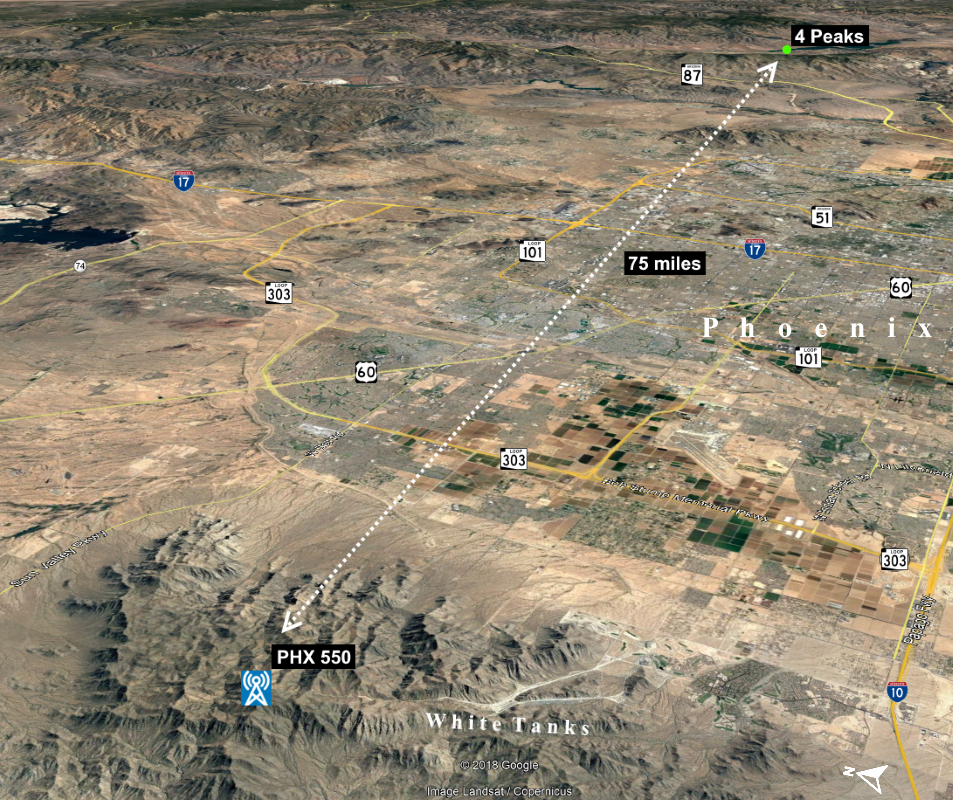 I was at about 5700' on the Four Peaks in the Mazatzal Mountains, Arizona just east of the Phoenix metro area. The repeater site is atop the White Tank mountains at about 4000' on the opposite side of the Phoenix metro area. I was receiving good signal reports back from others. VHF and UHF are obviously very dependent on line of sight (and a high gain antenna receiving on the other side), but this isn't too bad for a CCR! I camp and off road in this area regularly, and it's good to know I have reliable GMRS coverage with only my HT once I'm above the smaller hills.