I was just quoting the gain figure posted by the other op. I understand how it works, and don’t expect 6 dB from an LPA.
Ideally I would keep the discone, and add the LPA. Note- there would be a height difference as well as a location difference between the two antennas. LPA would be 10 ft higher than the discone. Also, the LPA would be clear from some large trees that block the discone from the north.
As far as the Gain on my Hustler G7 - mfr. specs. I doubt I have 3 dB gain on that antenna at 21 feet. But, it’s durable and so far a great antenna for what I use it for.
Thanks for all the info.
K

You can expect the LPA to blow the discone away ! here is a tip I know this sounds strange but try pointing the LPA at a mountain instead of directly at the station if you can sometimes mountains make excellent reflectors

Here is one example : We have a 14,000 ft mountain here and if I point my 17 element 2 meter beam towards a repeater in AZ that's about 350 miles away from me I get nothing but when I point the beam almost the opposite way reflecting off the mountain it comes in fine I need to use 100 watts to hit it but it works fine I also need to do that sometimes to reach LA from here

Now try that with a discone LOL

I remember years and years ago when I was a kid I had a UHF/VHF TV antenna mounted on two rotators that way I could turn the ANT to V or H depending on what I wanted to monitor it worked great on the scanner and man when I rotated to H it was night and day for somethings I remember one time I put it up on top of my dads tower and cranked it up 65ft and wow i was picking up TV from 100s of miles away ! that same antenna worked great for 6 meters as well but only in H and was useless in V however local stuff was usless in H

kb6hlm said:
try pointing the LPA at a mountain instead of directly at the station if you can sometimes mountains make excellent reflectors
Click to expand...

Logperiodic antennas doesn't have pin point directivity, as it only uses 3 active elements, so if will receive more or less everything in front of it. 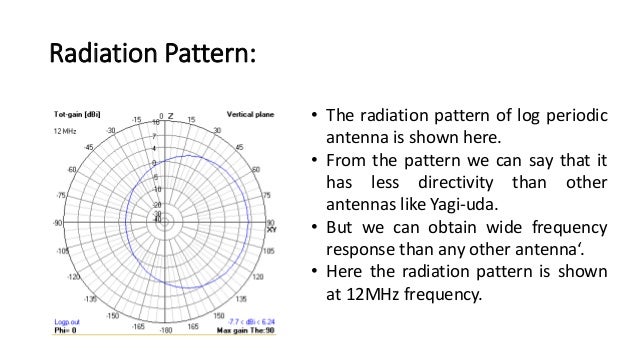 Yes I agree with the LPA having less directivity and gain then a mono band Yagi however with that being said I find it VERY DIRECTIVE ! unlike the pattern your showing however it dose work fine for the most part off the side

Example : if i move the ANT just one degree from that mountain all is lost

one other Example: where I live we have a aircraft approach frequency that comes in off the side of the beam however its down in the mud too far to be readable if i point the beam right at it I get a S-5 but if I turn the rotor just a bit its down in the noise again !

"It only takes minutes to create a chart like that but years to gain knowledge" I have over 40 of them
Last edited: Jun 14, 2019

Also, dBi is a world standard for antenna gain just like dBd. All commercial satellite uplink and downlink antennas are rated in dBi gain and not dBd.


kb6hlm said:
You are joking right?

This is a tremendous amount of loss when you consider how much it takes to gain that much ! its night and day when it comes to weak signals at 3 db loss your signal is readable or not

On your discone you may not even have a readable signal at all ! but with the beam you may have S-9 Plus !

Don't let those db gain specifications fool you its not fair to compare beam with a Vertical antenna of any sort just look at my example on my last post comparing a 6 db gain mono band Vertical to the logperiodic NOT EVEN CLOSE in fact it was a full 5 S units !!! so that would mean 30 db gain over a antenna that has 6db gain ??? see what i mean that makes no sense at all

Again dont compare antenna gain factors from verticals to yegis ! you can compare a vertical to a vertical or beam to beam but not to each other and even then the antenna manufacturers are taking about DBI (decibels relative to isotropic) this is foolish and its a way of making the antenna better then it is dont be fooled by this
Click to expand...

Also, dBi is a world standard for antenna gain just like dBd. All commercial satellite uplink and downlink antennas are rated in dBi gain and not dBd.
Click to expand...

Well as far as UHF/VHF is concerned ya your right its not the same and VERTICAL / HORIZONTAL polarity is even more critical then HF !! its night and day

Ubbe said:
3dB at receive are not much loss
Click to expand...

Looking back on it now it I really don't think that's what you meant and I would like to point out here for others to understand how much of a loss that really is!

Ill try to make it a simple as I can without a lot of nonsense lets say you have a water hose and the water is flowing out at 10gpm then you put a T on the end now you have 5gpm on each end right? same waterflow but only half now at each end that makes sense right? OK now for the hard part to understand but its really not that hard once you understand it

Now lets compare that with antennas lets say you have a LPA with 6db gain and you have at the radio a signal of S-5 and you put a splinter on the end of the coax for two radios well that's fine and it doesn't seem like a lot right ? well think about it you just lost half your signal strength remember 3db = half your power or in other words it would take twice the power to get 3dbs ! so now both radio are receiving at S-4.3 not S-5 any longer now that's a huge amount of signal loss ! it may not seem like much but lets say the station dropped into the noise level and is no longer there and you want it back? the station you was receiving before you put that splinter on is now GONE!! OK what can we do? add a preamp ?? nope wrong !!! remember a preamp doesn't actually amplify signals like the name implies (lets leave that for another thread) and there is no SIG to even work with anyway its gone into the noise and a preamp would just make matters worse ! so what do we do then ? #1 take off the splinter #2 raise the ANT #3 buy another $300.00 ANT for 3db ? really? wow

I vote for #1 take off the splinter

Now that's for receiving so for transmitting you could double your power to get 3 db and then double it again for another 3db and so on and so on but think about this you still need to be able to copy the person right? and most antennas are cheaper then amplifiers however sometimes that's not a option

Anyway........ The next time you say "well its only 3db not a big deal" ( half your signal strength down the toilet!)