Which direction is this supposed to spin on the drill to make an NMO hole? 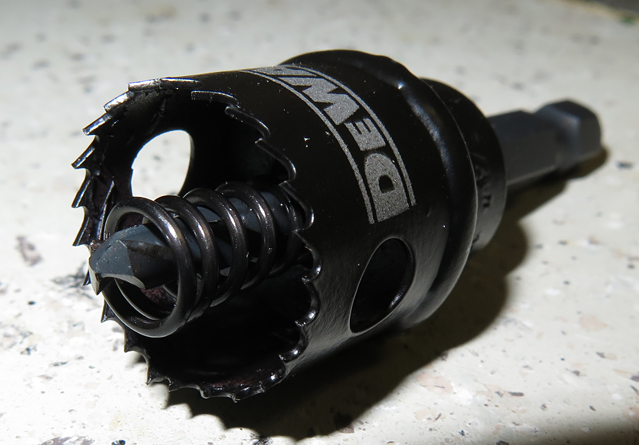 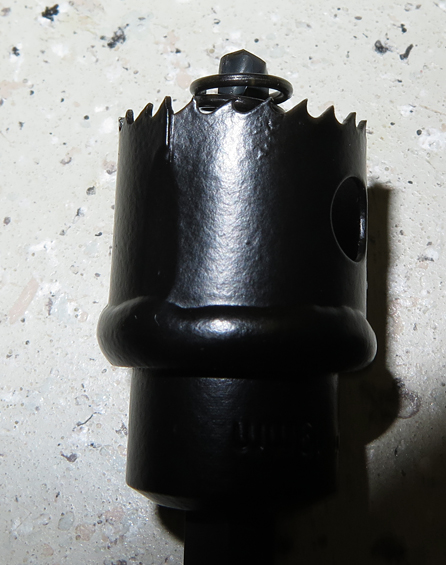 From the driller's point of view, clockwise.

Yeah, I would us a proper hole saw. For starters, that will produce a hole much larger than 3/4. Antenna mounts are not very forgiving, they require a accurate 3/4 hole from a thin sheet metal antenna hole saw.

Well, thanks for the replies. This drill bit has good reviews including a number of posters who said they used it for NMOs. My plan is to sacrifice a baking tray and practice a few times. Then I'll see how the mount fits in the baking tray. The antennas are going on the trunk, so no worries about any headliner.

That spring's gonna shoot that hot slug out. And you may not be happy with where it lands. Do yourself a favor. Get the right hole saw for an NMO mount.

Well, the NMO drill bits are a lot more expensive. I wonder why. This one looks exactly 3/4" diameter held up to a ruler, so I'm not sure how it could cut a hole bigger than that.

You can play stupid games, and win stupid prizes with the big-box store close-enough crap, or you can spend the money once and get repeatable quality for a LONG time - that won't rip big messy holes...


look at the tooth size for the purpose-built ones, and the big-box crap...smaller teeth, finer cut.

It's going to walk and wobble. It will leave you with a hole just shy of 7/8th of an inch. NMO mounts do not have that much tollerance. When it says 3/4 hole on an NMO mount, it literally means no more than 3/4 of an inch.

You've asked a question that experienced users and professionals have answered. This is not our first rodeo. That hole saw is not going to do you any favors by being cheaper than the proper saw for the job.
Last edited: Apr 22, 2017
S

Before you commit to drilling on your vehicle, I would suggest your first shot be with a light center punch followed with an 1/8" pilot hole. I'm guessing that the drill bit included with the hole saw is about a 1/4" or so. That size bit would have a tendency to dance on the sheet metal before making a penetration. A punch and pilot would make the process much smoother.

That spring is going to put a dent in the sheet metal as you press down. The spring might be handy drilling plywood, but not good for sheet metal.

Sent from my SM-T350 using Tapatalk

Wish I could tell ya how many times a "amateur" would come into radio shops I worked at wanting to know why there antenna mount wouldn't stay centered or was leaning and even popping into the hole when trying to tighten. I loved seeing the dancing drill marks on the top of the roof. Every time it was because they would use a generic hole saw they bought at a hardware store from the bargain bin or such.
The other was the headliners that were tore up from the drill being to long and snagging the material.

Try your luck. It might work throw the dice. It's your investment.

In the 70s and 80s before there were any specific NMO hole saws, I used similar looking hardware store hole saws but with no spring, and probably put in 100 or more perfect NMO mounts. Most were drilled top down through the roof without removing any headliner but I usually slid a thin stiff sheet of plastic between the roof and headliner just as a precaution.

When drilling top down I use one arm carefully holding the handle and trigger of the drill and another arm with elbow resting on the roof and a hand keeping the drill from plowing through the roof. I can drill a 3/4" hole with headliner probably 1/8" below the roof and not snag anything. When installing antennas and radios, experience trumps tools anytime.
prcguy
Last edited: Apr 22, 2017
S

Former installer for an upfitter here... I cannot recommend the appropriate antenna saw enough. They are worth every cent of their price. The replies to your question are accurate.

Sent from my SM-G930V using Tapatalk

I would NOT use that hole saw, it will tear up the headliner and also may be Electrician size for conduit.
Which is larger than 3/4 inch.

Homeboys-Scanna said:
Well, thanks for the replies. This drill bit has good reviews including a number of posters who said they used it for NMOs. My plan is to sacrifice a baking tray and practice a few times. Then I'll see how the mount fits in the baking tray. The antennas are going on the trunk, so no worries about any headliner.
Click to expand...

I happen to have that exact same hole saw sitting in my garage. I have the official Antennex depth limiting NMO hole saw, too.

I also happen to have a set of digital calipers accurate to 0.0001 of an inch.

So take the previous comments with a grain of salt. There is some excellent advice above, and then there is the "me too" crowd.

I'll 100% agree that using the correct tool for the job is the right way to do it.
I'll also 100% agree that if you are doing a single install, not going into the installer business, you probably don't need to buy the top dollar hole saw.

The truth about hole saws is that they make round holes of a specific size. The tooth spacing on the saw part sort of dictates what sort of material it's going to work best in. Finer teeth cut slower, but work better in metals. Coarser teeth cut faster and are usually good in softer materials.

The "magic" behind the official NMO hole saws is that they have a couple of handy features:
1. Depth limiting. That helps reduce the chances of damaging headliners.
2. Fine tooth blades. Takes a bit longer to drill the hole, but does so in a more controlled fashion.
3. Replaceable saw blades. No need to replace the entire hole saw.
4. Some have a feature that scores the outer part of the hole on the exterior of the vehicle to help with grounding.

The 3/4" "Trade Size" statement above is true, but that isn't what you have. In the electrical industry, they'll sometimes call a hole saw or punch 3/4" trade size when it's designed for 3/4" conduit. It's actually 7/8" because that's the size of the threaded fittings. That can be an issue if you grab the wrong thing, but in this case you didn't.

So, I measured my "official" NMO hole saw, and it was 0.7475 inches in diameter. Just shy of 3/4". I've installed a lot of NMO mounts with this hole saw and I have never had an issue with that 0.0025 difference.
I then measured the DeWalt 3/4 inch hole saw. 0.7450 inches in diameter. A bit smaller than the NMO saw, but likely it would work just fine.
The teeth are a bit more coarse on the DeWalt hole saw compared to the Antennex hole saw.

I would absolutely prefer the Antennex saw, but that's easy to say because I have one sitting there ready to use. It makes the right size hole and won't go too deep.
But, the DeWalt hole saw will work just fine for what you are doing. It's going to make the right size hole. You don't need to run out and spend $40+ on an "official" NMO hole saw for one install or to make a bunch of strangers on the internet happy.
Just take your time and measure twice.

Just for giggles, I measured a couple of brand new Larsen NMOHFKUD NMO mounts I have sitting in my garage.
They'll fit in a hole as small as around 0.7250 inches just fine. They've also got enough extra on the underside to probably hold just fine in a hole up to 0.8000 inches.

Don't get hung up on a few thousandths of an inch.

scaseyjordan said:
Former installer for an upfitter here... I cannot recommend the appropriate antenna saw enough. They are worth every cent of their price. The replies to your question are accurate.

Sent from my SM-G930V using Tapatalk
Click to expand...

standard direction as label on drill. however a cheap stepdrill bit is the best way to make a hole for a nmo mount.

W5SAB said:
standard direction as label on drill. however a cheap stepdrill bit is the best way to make a hole for a nmo mount.

Sent from my XT1585 using Tapatalk
Click to expand...

Sent from my XT1585 using Tapatalk