I have been monitoring FDNY Manhattan on 154.250. Sounds like this is a repeater. Their input frequency is 154.010. When mobile units check in first on 154.010, they are not heard on 154.250. When the dispatch responds, repeater activity starts then. Does it mean that dispatcher manually puts his units on repeater? Is this trunking? How's this different from amateur repeaters?

P.S. Is this the correct forum for such topics?

Yes - as you say - the dispatcher manually puts the unit on repeater - dont ask me why - its just the way that they do it - always have as far back as I can remember - IIRC the dispatcher uses a foot pedal to turn the repeater on
Last edited: Jul 8, 2012

In FDNY parlance, it's called a "mixer". The dispatcher turns it on and off manually from the console. As long as the mixer is on, the base station will remain dead keyed and you will hear all activity coming through the input. If the mixer is off, you will not hear any transmissions from the field units, as the system it not setup to automatically key the base transmitter based on activity on the input.

When you hear them say "mixer off message", it means they have deactivated the mixer (repeater) so the transmission from the field is not broadcast on the output. Of course if you're close enough and listening to the input you can still hear the message, but it won't get repeated at high power.
A

Do they have cells or one main transmit cite on top of a tall building? They are heard far away from the city. And is it trunking?

Typically, repeater input and output frequencies at VHF are usually 3 MHz or farther apart. I am wondering how they do that.
T

Typically, repeater input and output frequencies at VHF are usually 3 MHz or farther apart. I am wondering how they do that.
Click to expand...

Not always, with good infrastructure you can take it down much lower. I've seen several splits less than 1 MHz off from the input and output. Look at amateur radio too, the typical split is only
600 kHz (0.6 MHz). It can be done, it just takes a damn good duplexer or combiner with good tuning.

To stay on topic, I believe this method is to combat unauthorized use and interference. Same reason the input PL tones are closely guarded.

Typically, repeater input and output frequencies at VHF are usually 3 MHz or farther apart. I am wondering how they do that.
Click to expand...

A VHF duplexer for a shared TX/RX antenna will work well down to 500 kHz or slightly less separation. 600 kHz is typical for 2M ham. Use of separate TX/RX antennas and good cavity filters will allow closer spacing than that. If there is enough isolation between the antennas then 154.010 RX/154.250 TX is no problem with good equipment.

Do they have cells or one main transmit cite on top of a tall building? They are heard far away from the city. And is it trunking?
Click to expand...

Each borough uses a single transmitter for the VHF and the counterpart UHF dispatch frequencies. These frequencies are analog conventional, no trunking involved.

zerg901 said:
Yes - as you say - the dispatcher manually puts the unit on repeater - dont ask me why - its just the way that they do it - always have as far back as I can remember - IIRC the dispatcher uses a foot pedal to turn the repeater on
Click to expand...

Foot pedal? You're living in the past, my friend. The consoles are computer terminals now, it's a virtual "button".
W

Repeater splits on VHF vary all over the place, and there is no standard like there is on UHF. In my local area I have a legacy fire system on 154.160 out with a 154.71 input. I also have PS agencies with inputs on the low end of VHF and outputs on the top end, often around 159 mHz.

On the VHF side there is 1 transmitter per borough. Manhattan/Citywide is in Long Island City, Queens. The other 4 borough's transmitters are in their respective central offices (even though we are not.)

The (DOITT) UHF system is a distributed transmission system that was spec'ed out for 20 transmitters. To my knowledge we are using only 5. When any borough keys up, all 5 transmitters activate thus widening the reception range. Great for buffing but more radio than we need.

Here is what a typical radio touch-screen console (not ours) looks like. 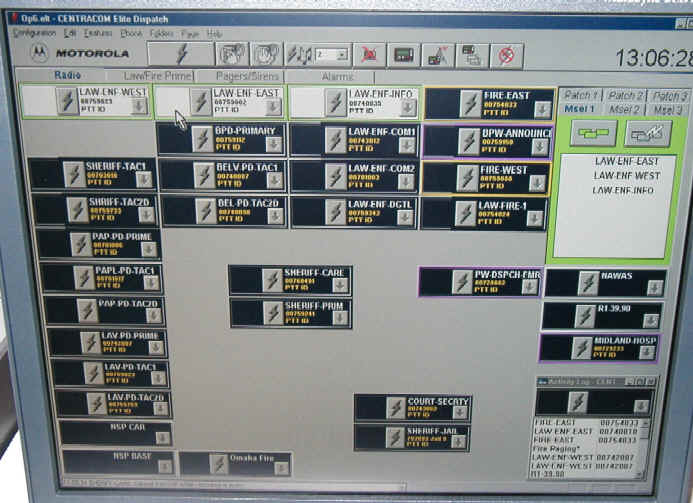 For comparison, here's an old console with large, tactile buttons: 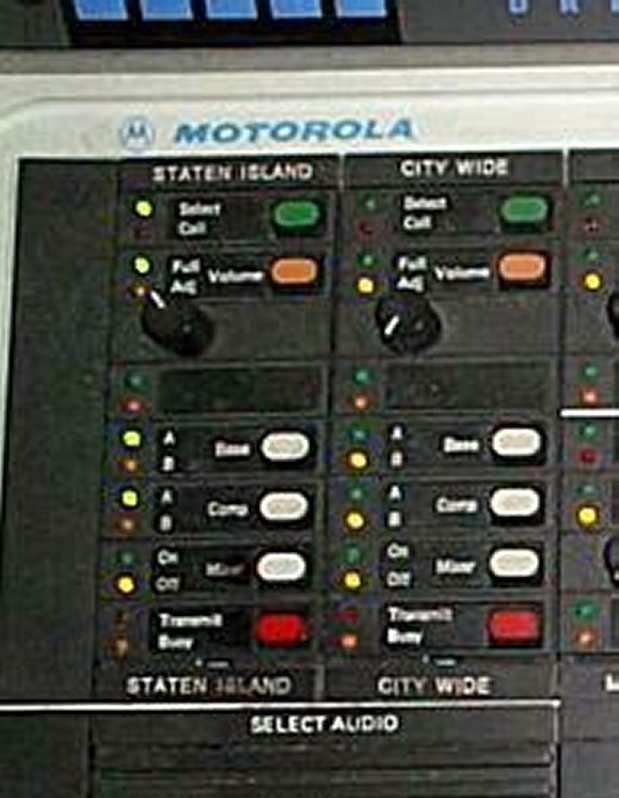 Why is the mixer used? Because of what trumpetman said?

Someone once told me that they had a repeater system, (or tried a repeater system), but it sounded awful with all the kerchunks. It must have been Edward Singer from FDNY way back in the 1980s. (I once got to sit in his office and chat with him for a couple of hours)

AFAIK, FDNY is the only major public safety agency to use manually activated repeaters.

Yes, unique, NYC in general is unique, there is nothing even close to it. Having five counties within a single city, one that has a tremendous population in a very dense urban environment, makes New York City unique, and places it in a category that requires a custom structured communications system.
R

Many many years ago I worked for the M, I was told that the reason for "The Mixer" was to get around a rule that stated no VHF repeaters (original install dates were in the 50's) , and could also been to prevent unauthorized transmissions since FDNY was C.S. in and out, and it was not unusual to hear Virginia beach VA at times. Don't know which is true, but for the times it could have made sense.

Frank, I like the picture of the old Centra Comm 1 console.

In my work I maintained a fire repeater that was 150 kHz seperation between input/output freqs.
R

While I don't recommend it, there are combiner systems that can handle down to 60khz, but the losses are astronomical. We run 2 simplex stations into one antenna, and with around 600 khz separation and the losses are about 1/4 to 1/3 the power.

I think the FDNY also operates mobile date terminals (MODATs) on board fire apparatus to keep some of the communications off the radio.
Here in Connecticut I can hear the Borough of Queens FDNY most days on 154.400 - the same frequency as my local volunteer fire department (different PL, of course.)
A

Two more questions please:
First - How come NYFD repeater has such a wide coverage, since it's one repeater in LIC?

2nd - Speaking of 5 different transmitters, how do they manage input and output frequencies for the repeaters? Do users have to manually change their radio channels when they move from one tower's coverage to another? Or do all repeaters have the same input and output combination?

The transmitter in Queens is on a pretty high hill if it's still at the Central Alarm board in Forest Park. The other is they were licensed for 350 watts on VHF. The DOITT UHF system which is actually repeating the VHF as well as UHF is a simulcast transmitter setup with 5 transmitters on the same frequency which greatly improves coverage over a single site. The power of each station actually adds to the signal. Each Borough as has been described has it's own frequency. The users must change channel when going from one borough to another. There is no automatic selection.