help a dummy with some info

ok I'm kinda new to scanners, anything above analog is new to me.

so with SDR. I can get this dongle and some software and I can listen to freq on my computer? thats the basic i want to do.

is this for trunking only or can i get the analog freq of my local area too?

is people running this on windows 8 successfully? I googled this and haven't seen a positive yes yet.

how easy or hair pulling is getting this to work. i'm not completely dumb on computers. I have put a few together and have done some networking. so I can follow directions.

If you want the simplest explanation, here you go (at least this is how I explain it to others albeit as wordy as I tend to be):

1) Buy "cheap USB TV tuner stick" (but it has to be a specific type of tuner - either the Elonics E4000 (expensive and rare) or the Rafael R820T (by far the most popular and cheap 'cause you can find 'em for about $10 like I did). These tuners were designed for digital TV systems that use a totally different broadcasting technology in Europe and other parts of the world (known as DVB-T) than what we use here in the US (ATSC). I recently heard that one reason these sticks have become so cheap in cost is because they're about to change the European digital TV system to some other format which basically would render the DVB-T sticks all basically useless - that is, until some rather smart fellow realized you could use them for these SDR purposes.

The thing to look for is basically the most common thing people refer to aka "RTL stick" - that comes from the fact that the sticks use the Realtek RTL2832U USB communications chip which is what allows the tuner to be controlled using software on a computer. As long as it's an RTL2832U based stick it'll work with most any SDR application available today.

Here's the most common "cheap USB TV tuner stick" you'll find out there: 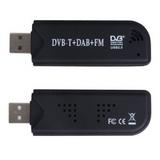 You may find slight variations (different writing on the case, mine has the same wording but says "NooElec" on them because that's the company I bought them from, you'll hear that name mentioned quite often because they sell more of those sticks here in the US than probably any other reseller - I got my sticks for $9.75 each from them using their Amazon storefront but the price fluctuates sometimes. Still, for the ~$23 I've spent on two sticks, they've already paid for themselves a thousand times over.

2) Install specific Zadig USB device driver (hardware won't work as we're trying to make it work without that specific driver, fairly easy to install for most folks with the automated one - you do NOT use the drivers included with the USB stick nor the ones from Windows Update)

3) Install/extract SDR program and there are several to choose from, the most popular is SDR# (SDR-Sharp), but others exist as well like HDSDR, RTL-SDR, SDR-Radio, and of course GNU Radio too

4) Run the software, configure it so it makes use of the RTL device in the system (and yes, you can have more than one but the SDR programs all work with just one at a time; if you want to use more than one, you'll have multiple copies of the software, one for each stick). Tune something and turn up the volume, you're pretty much done.

If you want to monitor digital mode comms, then you'll need DSD (the original digital speech decoder, works very well for most folks) or the newest tool known as DSDPlus or DSD+ (it's not by the same author that we know of, and unfortunately nobody knows who wrote the original DSD either). DSD+ adds a lot more functionality and - this is my personal opinion here so take it as such - seems to just be better than DSD in almost every respect, with a lot more functionality and (again, personal opinion here) superior decoding capabilities for P25/DMR/MOTOTRBO/NXDN compared to DSD. Stuff that DSD can't even touch in terms of decoding gets processed into somewhat intelligible audio by DSD+, so try both and figure out which you like.

If you want to monitor trunked communications systems (analog or digital) then you'll be adding Unitrunker into all that as well because that's the trunking decoder that matters, period (ok, another personal opinion, shoot me, but I'm absolutely positive I'm not alone in that opinion about Unitrunker - thanks again, Rick). You'll end up using Unitrunker along with an SDR program working together to monitor the trunked comms as they hop from frequency to frequency. I can't recommend SDR# highly enough, really, because a lot of trunking integration using plugins is designed specifically for Unitrunker. You'll end up with a 'chain' of apps feeding the signal across them resulting in a final product of audible sound/speech.

There's a lot more to this but that's the basics overall. Here are some tips that will make things much better:

- you'll want a better antenna almost immediately because the tiny little 5" things that come with most every one of these sticks is for lack of a better phrase "complete utter pieces of crap" that barely have any reception ability save for the upper UHF bands (800-900 MHz because of their length). You'll need to get a pigtail - a short 6-12" connecting cable that goes in between the stick and a more commonly used connector and wiring. MCX is the most popular connector on the sticks themselves so you'd probably be looking for an "MCX to <BNC/F/N/PL-259/etc>" pigtail depending on your needs.

Making an antenna can be really really cheap - a couple of cut-up coat hangers, or pieces of wire, bent and attached to an SO-239 chassis mount can amaze you - there's also the rather amazing Homebrew OCFD as well which can be either the full copper pipe version or even made from two pieces of wire and a balun/transformer) and will offer some pretty impressive results when you're done.

Basically, the included antenna is to be avoided for anything and everything except maybe making sure the stick works when you get it.

- virtual audio cable software, which some people don't use, others do. I myself do and recommend it, but it's up to you based on your particular audio requirements and your OS. Obviously most of this software runs on Windows (SDR#, HDSDR, SDR-Radio, and some others, even GNU Radio has a Windows build iirc but it is primarily a Linux-based software package). There's Virtual Audio Cable, a commercial software product, and a lot of people swear by it. It has a trial version but the trial version will insert an announcement into the audio stream every 10 seconds or so and it can really screw up digital mode decoding, so be aware of this. The other product - and the one I recommend and use myself - is called VB-Audio Cable which is donationware (which means pay what you think it's worth) and if you do donate they'll provide you with the info to get a second or third one working as well (I use two of them myself).

As stated, you may or may not require a virtual audio cable depending on your setup. Some people make use of the Stereo Mix or "What You Hear" mixer in Windows, others - like myself - find it easier to just add the virtual audio cable and be done with it.

NOTE: when dealing with this SDR stuff with respect to the audio, all the apps/programs in question basically need one thing to make them all work together: they need the audio hardware aspects to work at 48 kHz for the sampling rates. The default for Windows is traditionally 44.1 kHz so this means you'll need to make some adjustments in the audio subsystem whether you use virtual audio cables or not. DSD/DSD+ only work at 48 kHz on the input side so this what you'd consider a must-do thing.

- ask questions if needed, we're all basically new to this SDR thing and most all of us are learning this stuff ourselves as it progresses. It's a great new horizon to look towards in terms of our scanning hobby.
P

That's a very awesome write up and helped me beyond my expectations. Thank you for taking the time in writing all that.

br0adband did a great write-up on the basics of using dongles for SDR. About the only thing I can add is that you may need an FM trap inline from your antenna to your dongle. In my case it made a big difference as nearby FM stations overloaded my dongles. The one I use is only about 5 dollars. Here's the link to RadioShack's page on it - RadioShack FM Trap : Adapters, splitters and amplifiers | RadioShack.com
P

thanks all. I'm going ahead and ordering a dongle to see if I can get this working

I also suggest reading the article on "Virtual Radar" in the January 2014 edition of QST. You don't even have to be a member of the ARRL to read the article since they put a feature article on their website every month as sort of a "teaser" to get people to join. The article for January was an article describing another really interesting use for those dongles which is to track aircraft and plot their position on Google Earth.

The article also talks about these dongles and how they work along with step-by-step instructions on what it takes to get them working.

ordered a dongle. this will give me something to mess with during down time in the hotel.
LOL I can tell everyone im going up to my room to play with my Dongle.