I am trying to "scan" a particular system in my area that is using LTR Standard. I have the F43TR radio. Question is, I have the software (CS-F43TR) but how the heck do you program a system on this thing?

In particular I am looking to program Bexar County Protective Services. I have all the info from RadioReference but not sure how to plug everything in correctly.

Anyone ever program an LTR Standard system on these things that can give me a hand?

Below is the attachment from RadioReference regarding the system which lists the TGID's. I've also attached the Repeater (Site) page. 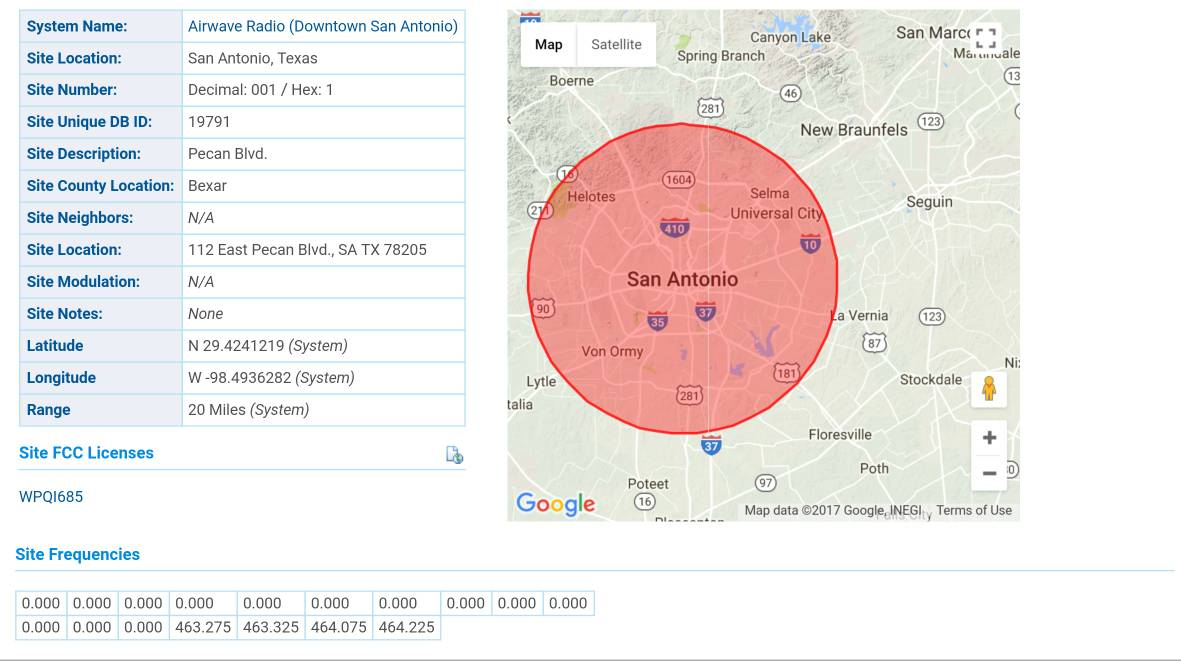 Hmm, like they coined a similar phrase in the old classic 1980 Urban Cowboy Movie ...
Maybe you have been "Looking for Help in all the wrong places" Did you ever get help ?
I have the same model radio and just was thread digging and saw your 7 month old post !

As far as monitoring the BCPS (Bexar County Protective Services) and Lawman Security,
Back in about late June 2017 Airwave Radio shutdown their downtown LTR (112 E Pecan St)
I spoke with the Airwave CEO Fred Hurst on 7/5/2017 and I brought up in conversation that
I noticed his LTR downtown site was only functioning on 1-CH the LCN#9 464.0750 Home Repeater
The other 3 Freqs for LCN#10,LCN#14 & LCN#17 were no longer mapping to his downtown system.
I remember he explained I think that his lease situation had changed and he was going to either move
or figure out something else to handle his 3 downtown customers. I recall another LTR provider
told me most radio providers moved away from the 112 E Pecan rooftop down due to sky high rent
and not to mention they had a fire that I believe may have even damaged the rooftop radio room ?
Most other providers like S & P and Ind. Comm. have sites at 101 Bowie St Marriott River Center.
I told Fred I noticed his STA type FCC License at 8023 Vantage IH10 & Callahan atop the former KCI tower
and he said it's a possible future option. https://www.radioreference.com/apps/db/?fccCallsign=WQZN832
I see Airwave is using their 464.0000 in encrypted DMR mode to beam out to or link their other towers.
I did not believe his downtown based LTR handheld customers at CHCS, Lawman and BCPS were
just magically reaching the NE IH35N Queens Crown or NW Leon Springs LTR sites without "help"
I received BCPS handhelds downtown sure enough transmitting on the old LCN#9 Input freq of 469.0750
and output of 464.0750 as well as the 464.0000 DMR encrypted backbone. However as the BCPS security guard
talked on his ICOM IC-F43TR radio at Hemisphere Park I was receiving his TG simulcast on both far away LTR sites.
So chalk up it up to Fred and or his radio tech for employing some clever means to service his valued customers !
Did Airwave perhaps install a clever custom internet based or backbone repeater box for each downtown customer ?

btw ~ Do you also have the programing cable ? I have both the Serial and USB version of cables.
Last edited: Nov 9, 2017