As of late there's been an increased amount of tactical operations from the Airships in LA - I've been curious about what sort of radio package/hardware they operate in the helicopters to efficiently bounce between channels as smoothly as they seem to do so. Seems like it's more involved than scan lists and priority channels.

From what I gather, the TFOs operate an '8 channel radio system' which seems to be independent of the VHF Air system which I imagine is operated by the Pilot. It appears at one time they used a system from Wulfsberg Global which could integrate multiple transceivers. Wonder if it's some updated variant of that (apparently they now manufacture P25 equipment) with external control provided by a GUI on a screen.

Or maybe there's a considerable amount of coordination occurring on the encrypted ASD channel which informs them as to which other channels need their attention.

This article has a photo of the cockpit of one of their A-Stars half way down. The center console has a Wulfsberg public safety radio on top and a Technisonic “all band” public safety radio below it. The technisonics generally have multiple receivers in them that can be monitored simultaneously. So that’s 3 public safety radios right there, plus the two VHF comm radios on the air band side used by the pilot. TFOs are incredible multitaskers.
T

In this photo it appears the have one of the more recent Techisonic models, and are also running a pair of the A-711L audio routers. Reading about that, it appears LAPD had some input on the unit's design.

The Technisonic TDFM-9xxx series transceiver modules use Motorola APX hardware. In other words, the circuit boards out of an APX 7000, or for more recent models the APX 8000, portables. Each module is programmed separately using plain old APX CPS through the front DIN connector.

The TDFM-9000 model can hold up to 6 APX 8000 modules, each capable of being provisioned for all bands. Slightly older models used APX 7000 modules in dual-band configuration, and back in the day they even made models that used XTS 5000 modules.

It's quite an impressive and capable chassis.

The second image you linked is an Audio Panel, which controls switching of which radios are being monitored. The top row of knobs controls the monitor volume, the middle row is the receiver on/off and the bottom row is transmit selection (only one at a time). There are two VHF COM radios (air band) and up to five public safety “PD” radios supported by that audio panel.

The P25 Technisonic radio control heads look like this:

Figure somewhere between $5k and $10k each for the portables alone... Then add on the chassis.
T

Agreed, between those two units it's a very capable radio system. Definitely still need a sharp ear to distinguish the traffic, but seems like the TFOs have a pretty good handle on that.

San Diego City Police helicopter prices for that gear listed on this page. Prices as of October,2019

MtnBiker2005 said:
San Diego City Police helicopter prices for that gear listed on this page. Prices as of October,2019

I must be missing something, because I see no reference anywhere on that page to the Technisonic TDFM-9xxx units we're discussing in this thread.
M

Gotcha. I'd like to see the spec sheet with the actual modules it's equipped with.

The TDFM-9xxx is the go to standard now for tactical FM comms. Besides the capabilities listed above, lo-band to 800, all APX, each module can crossband repeat in any direction and can simulcast across multiple modules. If enabled, front panel programming is piece of cake. The hardware also has the ability to tie in sat phones and other external radios such as handhelds that can be temporarily strapped in somewhere and controlled by the TDFM. Think allied agency radios, etc. where you don't need to maintain the TDFM's programming, but can get an APX handheld from the allied agency with their latest load and keys, and it ties right in.

The hardware also has its own audio mixing and TX routing so depending on the wiring, the helicopter's audio panel can determine which band is PTT and volume levels, OR the entire TDFM audio can be routed into just one slot on the audio panel as a master volume and individual levels and PTT determined on the TDFM itself.

The APX modules are pretty much handheld guts crammed in the box, which CPS sees and can program/APX firmware updates as needed as if it was a handheld. Technisonic has their own magic sauce and hardware that interfaces with the modules and presents the display info, button controls etc. The TDFM can interpret/control the ESW and TSW switches and that's about it, anything else taking advantage of APX features are ignored by the TDFM.
T

Stumbled upon this article while researching something else... looks like they are/were using Cobham RT-7000's as well. Looking back at the photo, that seems to resemble a RT-7000 below the TDFM-7300. 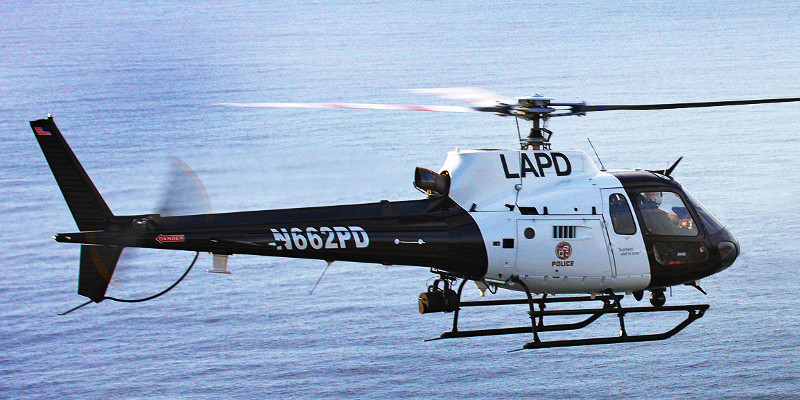 The LAPD Air Support Division (ASD) is the largest municipal airborne law enforcement operation in the world. The LAPD fleet consists of fourteen Eurocopter AS350B2 and five Bell Jet Ranger B3 helicopters, as well as one King Air fixed wing aircraft. Their mission is to provide city-wide air...

Of course this article was from 2016, they may have moved on to something else by now.