I think I finally got my computerized shack and desk completed. I had a friend of mine who does carpentry build me a shelf/riser to place on my desk to hold the monitors used on my radio PC. The riser is high enough for Icom desktop radios with an accessory or another radio set on top.

On the riser I placed the two new monitors and other radios not in the below-desk rack.

On top of the riser are the 2 32-inch monitors HD monitors. These are connected to an Intel NUC computer mounted on the rear of the left monitor using the VESA bracket. The right screen shows the 14 instances of ProScan running the various Uniden scanners (BCT15/15X;s and a couple 996's as well as a 536). I also have 2 instances of PRO96Com running to monitor the local P25 systems. On the left screen is running the AirNav RadarBox application. 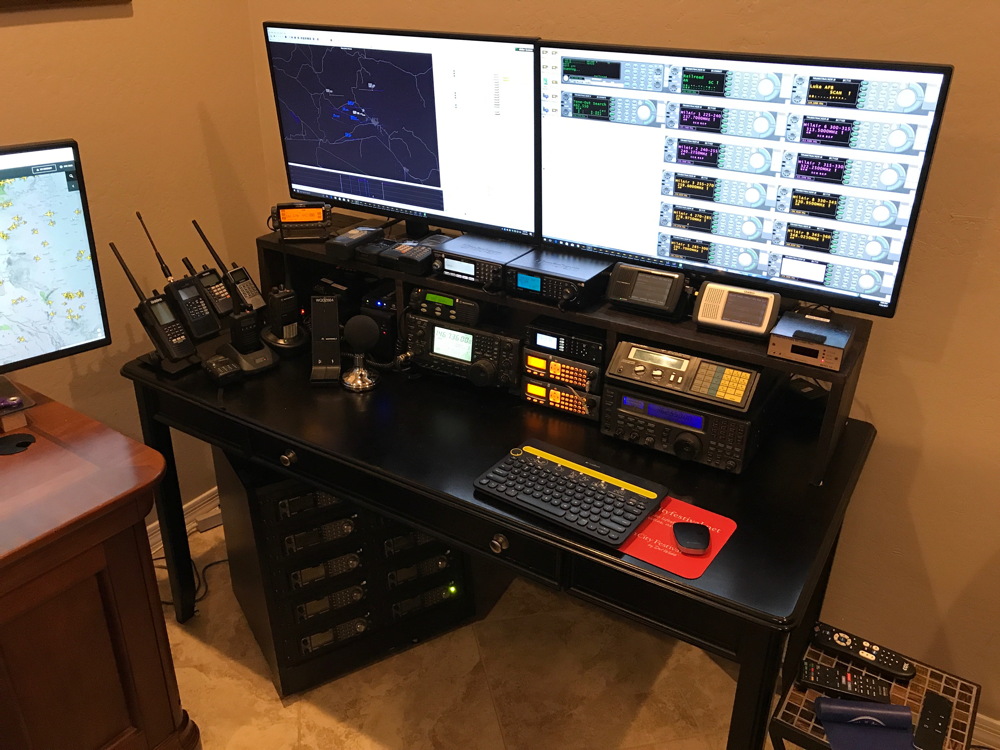 Under the desk is the Rack with 12 Uniden scanners, mostly BCT15/15X's as well as a 996XT. These are all handled via ProScan. Prior posts have shown the USB-Serial cables and other accoutrements needed to make all that work.

The Rack is used mostly for searching out local Mil-Air, 10 of the BCT15/15X's are set up to search small sections of the MilAir band for new activity. I usually find a couple new channels each week, but often they are never heard again, such is the nature of the beast. 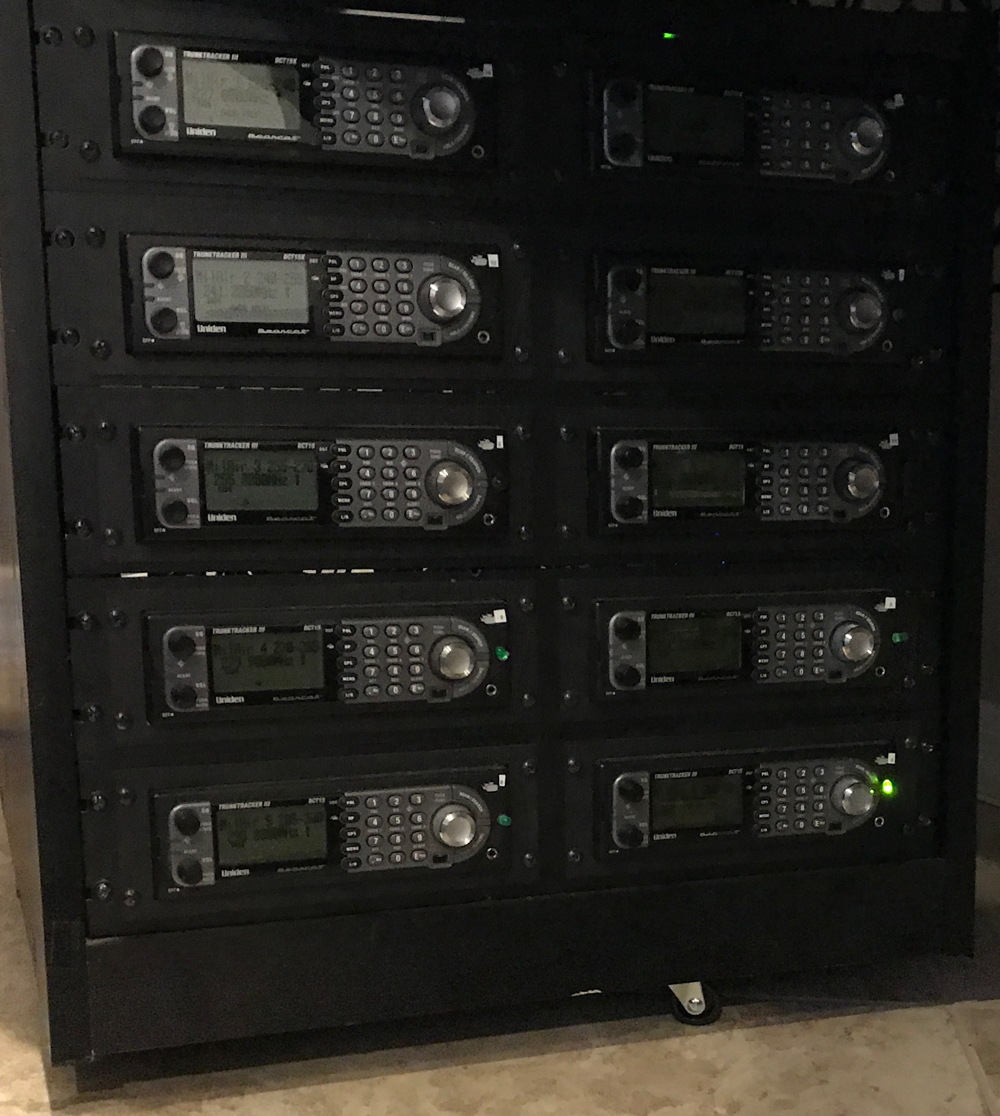 For antennas I have 3 Stridsberg multicouplers (with a 4th to be put in next week) to handle the scanners.The 2-ways and the R8500 have their own antennas as does the ADSB receiver.

I live in an HOA so all my antennas are in the attic, a friend did most of the work up there as I am too old and decrepit for that kind of work these days.

The rest of the office is pretty standard stuff. The 5K iMac has 2 extra screes (a 32 and a 27) for work. When I am not working I often have the live feed at an airport, Horseshoe Curve or some other railfan hotspot going as well as the RadarBox feed going. The TV on the wall is often on the Horseshoe Curve web cam during the work day if the wife is not hanging on the office, otherwise she usually has it on the news or is watching craft vids.

I know I change my shack often but I learn a little from each variation and the next one is always easier to put together. Next I might add up to 4 more BCT15's or 996's and put together another rack. I have the hardware and that would help remove a few more radios off the desk, thus reducing clutter. I have even thought about a standing rack cabinet with smoked doors. The wife likes this idea so it has a possibility of happening.

Very Nice set up!!!! I was wondering how you like your RadarBox? Been looking into getting one and was wondering what are your thoughts.

It is kind of neat to see what is flying around my area. Most of the aircraft around here is pretty standard stuff, airlines going into or out of the local airports or overhead to other locales. It seems that the only military stuff I get is transport and tankers (understandable). I am getting more GA stuff than before, an indication of increased use of ADSB by smaller aircraft.

My problem is that I live on the other side of a small mountain range of the main airport so I don't get near as much as I did when I lived in the Chicago area. I am also limited because I can only have attic antennas here.

Mine is the older legacy RadarBox. It is basically an SDR with special filters and amps for the ADSB freqs. They now have smaller dongles for this. I found that I can also use the application with my regular SDR dongles, they actually work pretty well when connected to the ADSB antenna.

Very slick. Was trying to zoom in and read your wall mounted diplomas but my tablet's resolution won't cut it. Looks like one is a Honorable Discharge, many thanks for your service.

Fast1eddie said:
Very slick. Was trying to zoom in and read your wall mounted diplomas but my tablet's resolution won't cut it. Looks like one is a Honorable Discharge, many thanks for your service.
Click to expand...

That one is actually my wife's upon her retirement from Federal service. Mine are from Northwestern University and the School of Staff & Command.

Rich, very nice. You may not be able to comment, but what do you like better, your bcd436hp, or the trx-1 ?. I am very close to pulling the pin on one,or the other.

Personally I prefer the 436, mostly since I find it more intuitive. The TRX is more sensitive, especially on UHF but I find the interface kind of clunky. Maybe it just my greater experience with Unidens over the last decade or so.

I really like the ability to update the radios database, favorites list and firmware on the SD card directly on the 436 (and 536), this makes spare cards much more practical.

Thank's Rich. Somehow, I always seem to end up using my uniden scanner's too. Not bad mouthing them, I sold off a bunch of gre's. i've bought, an sold 4 bc346xt's. I even gave one as a birthday gift. I am mostly totally satisfied with my bcd396xt and bcd996xt.
Last edited: Jul 31, 2017
N

I have enjoyed seeing your setup involve and improve. I think it is safe to say that you have given us all some good ideas to use for our setups.

I totally agree. I've seen some really nice shack's. Rich's is about the best. I used to have a great shack, with 8 scanner's hooked to a multi coupler, and antenna. Circumstance's changed. I am still happy with what I have. I am limited by apartment rule's, and antenna issue's.
W

N9JIG said:
Mine are from Northwestern University and the School of Staff & Command.
Click to expand...

Thought I recognized that when I was looking at the shack pictures.

I did the 81st class, which they conducted at the NJ State Police Academy in Sea Girt in 1994. Does that make us fellow Wildcats or something?

WQPW689 said:
Thought I recognized that when I was looking at the shack pictures.

I did the 81st class, which they conducted at the NJ State Police Academy in Sea Girt in 1994. Does that make us fellow Wildcats or something?

Class 294 in Evanston. I suppose that makes us Wildcats or at least mildly weird kittens.