Sounds like public safety officials are chasing those drones out on the eastern plains tonight. MAC7 on the CO DTRS. Sightings in the Brush and Wiggins areas.

BRUSH, Colo. -- Seventy-seven people from multiple local, state and federal agencies attended a meeting at a golf course in Brush to share information and discuss ways to collaborate effectively when it comes to the mysterious drone sightings in Colorado, according to the FAA. Morgan County...

Most certainly they are being controlled by some radio frequency. If they are in a given area for any length of time, it should be fairly easy to scan the most likely frequencies and pinpoint the frequencies actually being used which would allow the controlling source to be located using direction finding equipment. I know some drones use WiFi type signals however I'm not sure this is true of all drones.

I hear some were seen over Ft Collins and Castle Rock.
S

The drones were flying over the East part of Greeley near the airport headed South at about 7 PM or shortly afterward this evening. Evans police were talking about them and the county sheriffs were following them for a time before losing sight of them. The last I heard citizens were reporting about ten drones flying over Hudson heading South toward DIA; this was probably around 8 PM. Does anyone know offhand what the Facebook groups are that are talking about live sightnings? Just curious...

Would they use the 72-73/75-76 MHz bands? Would WiFi type signals be in use? Surely, there is some type of radio signals in use should such an expensive plan crash. If they are moving slightly West they may fly overhead Greeley and areas South of Greeley this evening.

It want be long till some crazy pot grower shoots a few out of the sky and then you will know who owns them real fast. I am surprised that ain’t already happened.
M 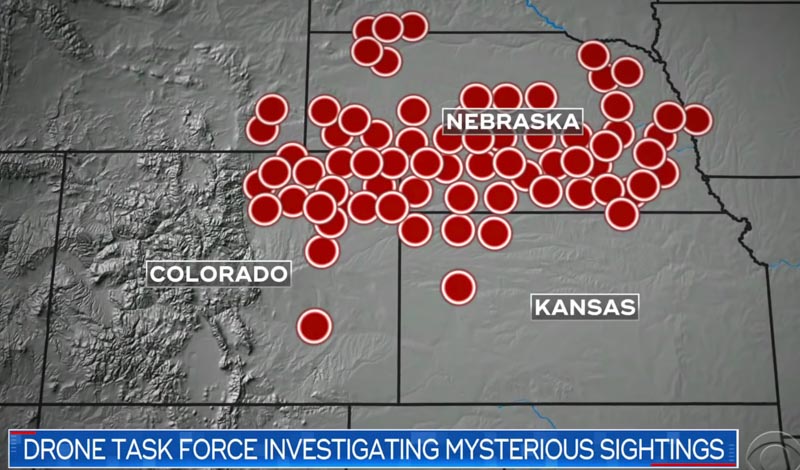 The Colorado State Patrol had one or two airplanes up this Sunday evening flying around the Wiggins area for several hours looking for drones.

About 20 years ago in this same area (West of Wiggins) there were a number of mysterious things I personally experienced. I use to spend a lot of time listening to VLF radio astronomy signals during the night in this area. One morning, a couple of gentlemen in their approx. 40's in an old truck stopped and talked with me asking if I was trying to hear UFOs with the long antennas mounted on my vehicle. I said no, that I was listening to radio astronomy signals generated by the earth. They asked if I owned a gun for my protection and proceeded to point at a field and stated a UFO had landed there and started the field on fire several nights previous. I looked toward the direction they pointed and did not see any signs of fire. I just figured they were pulling my leg and blew them off as some crazy guys.

Later that same day after sunset, I was sitting there (on country road 89 at about what would be country road 54) with my headlights turned off listening to radio astronomy signals with my window rolled down when I suddenly heard something approaching me from the empty field to my East. To my East was a field that was empty for four miles (no roads, just an empty field). I estimate the object was flying above the ground maybe 20-50 feet and as it was approaching me sounded like a loud hissing noise like high pressure air coming out of a jet/nozzle. My first instinct was of a car traveling at high speed down a paved road toward me. But here I am on a very isolated dirt road about four miles from the nearest power lines with this sound coming toward me from a four mile empty field to the East. I was uncertain whether to turn on my headlights or not as I did not know what it was I was hearing and whether I wanted it to know I was there. It came toward me from the East North East toward the front passenger side of my vehicle. Before reaching my vehicle the hissing sound nearly stopped as the object turned and headed South and then South East away from my vehicle. As the object was moving away from me, it had some type of repetitive sound to it which made me certain it was man made. To this day, I have no explanation for what this was. It took a total of about twenty to thirty seconds to approach me and another ten to fifteen seconds I heard it moving off away from me.

Later in this same area, someone put up a battery operated electric fence around an empty field with no animals in it. That one still puzzles me.

And it must have been about a year later, there was a report in the Greeley Tribune of a dead person discovered in a bag just several miles North of this same location.

Due to these strange events, I moved my radio astronomy listening to another location.

Since that time, county road 89 North of Highway 34 has turned into one vast gas/oil drilling area. What was once a lonely dirt road with a few houses running on generator power has turned into a small oil mining city for the most part. I have often wondered if those guys were trying to chase people out of the area to purchase their mineral rights and if they had made that mysterious flying object I had heard that particular night?

I just find it very interesting 20 years later, the State Patrol focusing much of their time on this same area this evening. It does seem the drones are first spotted often up North and head South or East. I wonder if the same people are involved? Are the drones being used by these rich mineral right owners to look at heat signatures shortly after sunset for other areas which may be promising areas to purchase which show promise of underground gas/oil?

Most likely the CSP plane(s) were in that area simply due to a near miss with a medical helicopter in the area on January 7th and as it is an area that is relatively dark making it easier to spot drones. But, who knows, maybe there is a connection to the strange things that were happening in that same area about 20 years ago?
Last edited: Jan 12, 2020
S

Here is the CSP plane that was flying around the Wiggins area researching drone activity Sunday night Jan. 12, 2020.