OK, as promised, I finally completed my Server Cabinet shack. For the last week I have been recuperating from an illness and stuck at home. I would work 15 minutes on the rack, take a break, work another 10 or 20 minutes, etc. and eventually got it all done.

Now to get technical, it is really a Networking Cabinet, not a Server Cabinet. A server cabinet is deeper, networking cabinets are less so. This cabinet is 42u high (about 7 feet), 24 inches deep and fit standard 19 inch rack panels. I used much of my existing equipment from prior shacks and added a couple new items.

Here is the rack itself in its entirety:

I placed the equipment so that the stuff I interact with the most are at sitting level, items I rarely interact with or control by computer are at the extreme top and bottom. Thus the R8500 and IC746Pro, along with the 536, 996P2 and a couple other scanners are "right there".

The IC746Pro is racked on a custom built rack from NovexCom. It includes a 30A power supply, lit callsign indicator and dual speakers (one of which is connected to the TYT dual bander) and magnetic mic clips for a couple of the other radios.

Below that is the R8500, also on a NovexCom rack. Below the 8500 are the MDC and PL/DPL/DTMF decoders, then the two-way radios (Kenwood TMD-700A, TYT 9800 and a Moto CDM1250U. There are 2 Astron rack mounted power supplies there, one for the 3 two-ways and the other for the scanners. Below the CDM is my TRX-2 head, using the magnetic mount on the vented panel. 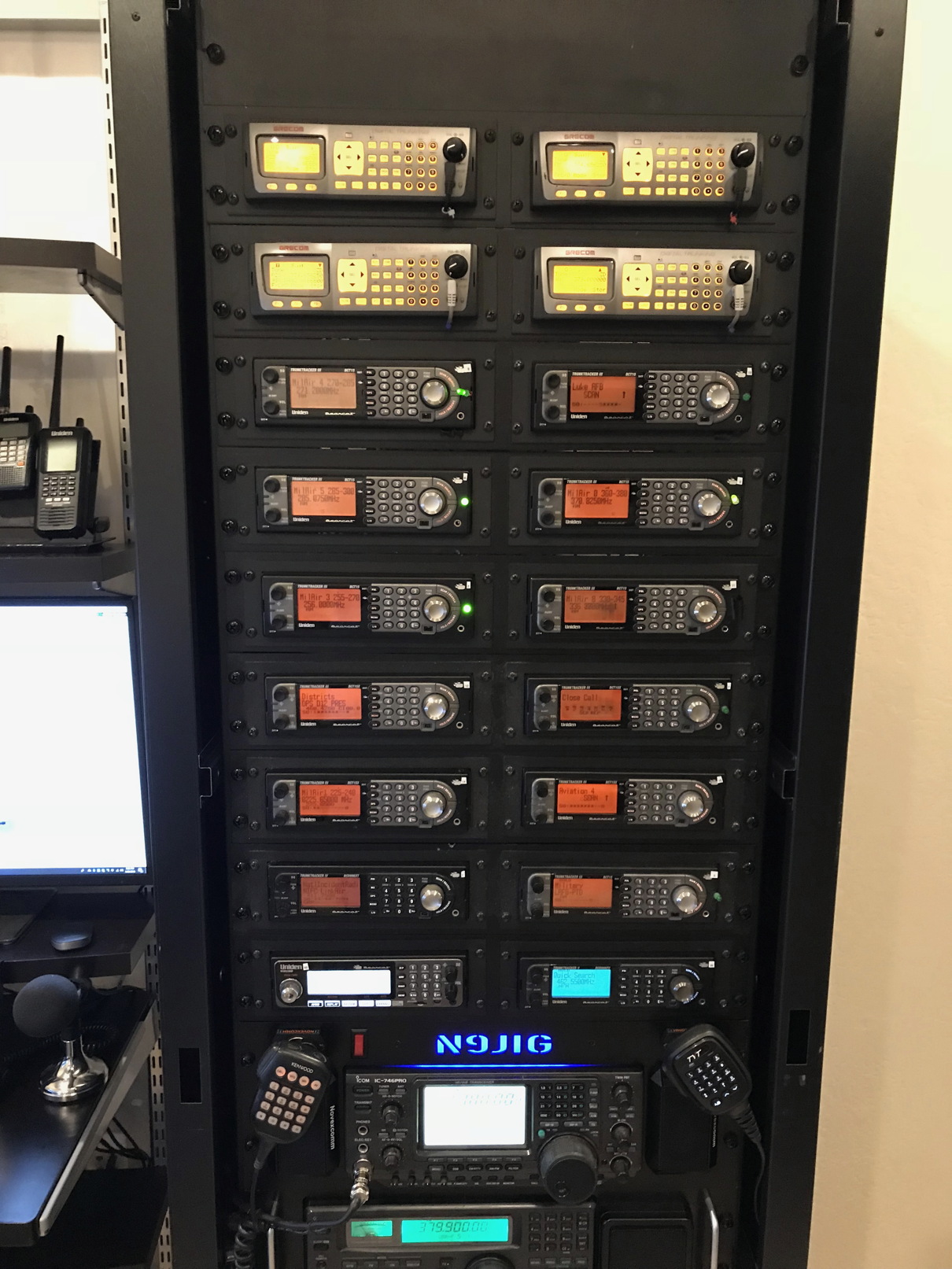 The BCT15's and 15X's are mostly used with ProScan to search out the MilAir bad for new channels, one is used to monitor the nearby Air Force base operations.

The PSR600's are mostly used for Pro96Com to monitor local trunked systems. I can either follow up to 4 different data channels or assign one or two to be a voice radio and follow comms.

The 536 and 996's are used for local rail, fire and police operations as well as the operations of the country club I live on. (I don't golf but some of the comms of the course rangers here is pretty funny...)

On the desk to the left of the rack is the Windows computer (Intel Nuc mounted on the rear of the monitor). This is used to run my AirNav box, ProScan, Pro96Com and other stuff. In this picture it has the AirNav application going. 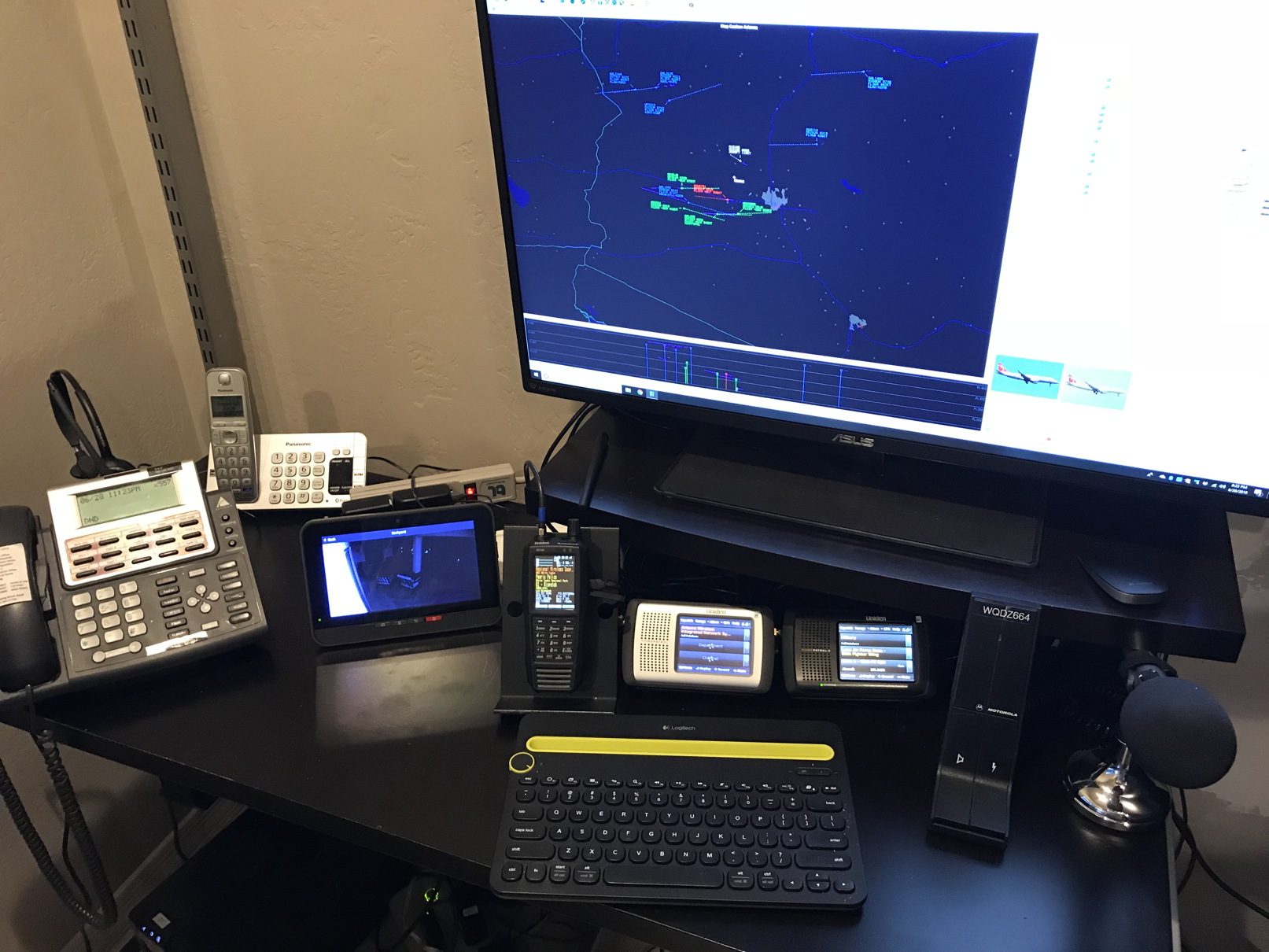 My main computer setup remains the same as before, a 5K iMac with 2 additional 32 inch monitors, all on a standing desk.

Coming up when I can get to it is another modular desk identical to the one just to the left of the rack, this one will be on the right and used for things like paperwork with drawers and stuff.

The whole set up is designed to be easily moved to accommodate things like painting (we are having the entire interior of the house repainted this fall) and working on things. I can pull the rack out, remove the side panels etc. to get at parts of the interior as needed. The main computer desk is all self contained, the only wire coming from it is the power cord. Behind the monitors are things like the UPS, backup hard drives, speakers etc.

The rack is pretty much self contained too. There are 3 Stridsberg Multicouplers, 2 8-ports and a 4-port, the three power supplies, 3 USB hubs and some other assorted stuf***e. I need to do a little wire clean up but want to run the system for a while first, then I can make whatever changes I need then clean up the wiring. I did make a point of keeping the 12VDC wiring on one side, the AC stuff on the other.

Coming out of the bottom of the rack are the 11 antenna cables going to the rack on the wall (which accounts for the drywall scars yet to be repainted) as well as the USB cable and mic cables for the 746 and Moto.

When I get the third desk put in (next week?) I will take the rest of my portables out and set up the various chargers and racks for them, keeping only the ones I use all the time near by.

All this was pretty much my wife's idea. She was thinking ahead to the repainting we are going to do and thought it would be easier than disassembling everything and putting it back together again. Now, I just remove the jumpers from the wall panel (they are all labeled) and move the cabinet to the center and draping it. Same for my computer desk. The modular desks will have to be disassembled but those are easy. (Elfa free-standing stuff is a dream to put together and take apart.)

I am sure there will be some minor changes as I use things but I think this will last a long time. The wife has decreed that it will because it was not cheap but she gave me a budget and I did it within it. Things got delayed with a week in hospital but the recuperation time provided a slow and thoughtful process to get it done right.
Last edited: Jul 20, 2018

One word to describe it, Rich:

You always do an amazing job Rich. Please consider making a video of this impressive monitoring post in action. That would be cool.

Absolutely fabulous! And we're glad that you're on the mend!
I

Would you do a write up of your antenna setup as well? What is used for monitoring different systems?

Sent from my SM-N950U using Tapatalk

Looks awesome, Rich! The shack is "complete." For now... Glad to hear you are doing better.

Do you plan to use some kind of echo cancelling materials on the walls?
They are bare and hard surfaces that will make your tabletop mics sound as if you where in a catedrial.

Ubbe said:
Do you plan to use some kind of echo cancelling materials on the walls?
They are bare and hard surfaces that will make your tabletop mics sound as if you where in a catedrial.

Really I don't think you need to worry. This is not Rich's 1st Rodeo.
R

Best wishes for your recovery.

Do you find it uncomfortable tuning the HF rigs without an arm rest?

My thought exactly when I read that post - that's like asking Lebron if he's thought about his trajectory when shooting baskets...

Would you do a write up of your antenna setup as well? What is used for monitoring different systems?
Click to expand...

The patch panel under the one desk is covered at https://forums.radioreference.com/pictures-your-shack-mobile-setup/366998-patch-panel.html

As for the antennas themselves there are many...

There are 4 ST-2's, 4 ST-3's, a couple ham dual bands, a couple HF dipoles, a few CenterFire models, a couple discones, and a couple two-way antennas on various bands.

All the antennas are in the attic as I live in an HOA with no external antenna rules. (my choice, I knew it going in...). Most were re-fed over the winter when the patch panel was put in with either RG6QS or RG8X. The original installations were by a friend here on RR as I am not as agile as I used to be when I was young.

We are thinking of a new home one of these days and have an area in mind that has no such restriction, if we do build there I would retain the patch panel but the antennas would all be outside. Of course I can just roll the cabinet out to the moving truck and roll it right into the new house.

Ubbe said:
Do you plan to use some kind of echo cancelling materials on the walls?
They are bare and hard surfaces that will make your tabletop mics sound as if you where in a catedrial.

With the amount of time I talk (on the radio that is) that really isn't an issue.


I have since put in the third desk and that would help absorb some sound and after the house is painted there will be some wall adornments, the wife has already been working on that.

My favorite part of the radio rack:

I'm moving to a new house soon and get to build out a new home shack from scratch. I might have to borrow some styling cues here, Rich...
U

N9JIG said:
With the amount of time I talk (on the radio that is) that really isn't an issue.

I have since put in the third desk and that would help absorb some sound and after the house is painted there will be some wall adornments, the wife has already been working on that.
Click to expand...

Good to know that you're working on it. I'm impressed with all the effort being put into the hardware with antennas, splitters, receivers, transceivers and rack and was a bit surprised that the link between speaker-ear and mouth-mic where somewhat neglected.

Having worked 35 years with professional radio systems and dispatch centers, not to forget living room Hi-Fi and home theater systems, I know that acustics are a very important and often forgotten factor in audio communication. There's a reason to why radio broadcast studios have their microphones just a few inches from the mouth. It gives a pleasant and enjoyable sound quality without any background echo. Any echo or disturbing background noise in a voice will make the brain go into overdrive trying to analyze and filter the audio which give fatigue and your'e feeling exhausted after listening for a while. And microphones are so much less forgiving than the human ear.

Having concreat walls and probably concreat ceiling, hard floor without any carpet, would be a big no-no in any enviroment that manage audio. But it seems you're slowly improving the acustics and the most important thing are that you are satisified yourself with the current situation and don't need someone to point out things that do not need to be fixed. ;-)