I have been asked a few times recently to update my shack pictures so with the new year I figured this was a good time. I have rearranged some of the stuff recently as well.

We will start with the Radio Cabinet:

This is a 42u, 7-foot-tall Networking cabinet. (Networking cabinets are less deep than Server cabinets and that is just what I needed.) On the bottom is a ventilated panel that covers my home networking stuff like the cable modem, router, firewall device, UPS etc. I have a couple ceiling mounted WiFi access points in the house that are connected to the PPOE router here.

Above this are 4 GRE PSR600’s. These are usually used for Pro96Com decoding of the local trunked systems.

Continuing up is the Icom 746Pro HF/2m/6M rig on a custom rack from NovexCom. It includes a 35a power supply and 2 external speakers.

Above that is the Kenwood TK880 UHF for GMRS as well as the TYT MD-8600 DMR dual bander. The Kenwood has a desk mic on the desk, and I use it often on our local GMRS system.

The next up in line is the Icom R8500, also on a custom NovexCom rack with speaker.

The rest of the rack is filled with 16 Uniden scanners, from the bottom they include 4 BCD996XT’s, 4 BCT15X’s and 8 BCT15’s. The BCT15’s and 15X’s are used mostly for military and civil aviation monitoring, 10 are dedicated to searching small segments of the MilAir band and the other two for known discrete frequencies. The 996XT’s are used mostly for railroads, public safety, searching, CloseCall and whatever tweaks my interest at the time. All of the scanners are mounted using JottoDesk faceplates and custom-made rack panels from NorthComm in NYC.

At the top is a large format red LED clock, easy to see from almost anywhere. On top of the cabinet is some networking equipment with a secondary WiFi for a laptop in the house as well as the one for the camera system.

Each radio has a USB serial cable and the Com Port number is labeled on the radio. I have them all set out in order so it is easy to tell what is what.

Inside the cabinet is a well-organized mess. On the back of each radio is a second label with the comm port number as well as my internal inventory number. Each of the Unidens is connected to a custom modified USB-1 cable with the radio end having a DB-9 connector replacing the more flimsy Uniden connector. These are much more sturdy and they are set up to use the rear GPS port, making for a cleaner front panel appearance.

Each radio of course also has an antenna lead and power lead. All three rear connectors are color coded to help me trace wires inside the cabinet. Each cable is uniquely tagged at each end so I can more easily find the one I need.

On the left inside wall of the cabinet is a wood panel with 2 8-port Stridsberg multicouplers. There is also a 4-port below that feeds the PSR600’s, the 8-ports handle the Uniden’s. Each of the 3 multicouplers as well as the R8500 are connected to AntennaCraft ST-2 antennas in my attic.

Also on that panel of the cabinet above the multicouplers is the AirNav RadarBox.

Below the 2 8-port multicouplers are 2 13-port USB hubs for the scanners. These in turn go to a 7-port hub that also has the RadarBox, the TYT and the UPS controller cables, this allows for the entire cabinet to be connected to the computer with a single USB cable.

Power to the scanners is provided by an Astron 25-amp power supply thru the PowerPole panel on the right side of the cabinet. There is a 5 foot long AC power strip inside the cabinet.

The cabinet is all self-contained. It is on casters so I can pull it out to work on the rear or sides as needed. Both side panels are removable so if I am doing major work I can set them aside instead of just opening them. I do not leave the rear or front doors on, they just get in the way and do not really add any function. I keep them out in the garage in case I need them.

There are wires coming out the bottom rear of the cabinet, including the AC power cord, the USB cable, a couple networking cables, a couple mic cables and the several antenna cables (12 at last count). Some of these cables are routed to the desk and others to the wall. Enough slack is left to allow me to pull the cabinet out for maintenance and they naturally fall to a position so I can roll the cabinet in and out as needed.

Behind the cabinet is a wall panel with 27 antenna jacks. These have coax cables, mostly RG6QS or RG8X, going up to the attic where my antennas are. Since I live in an HOA I cannot have outside antennas. My house is large and spread out so there is a lot of attic space. Since I was quite heavier a while back I had a friend do most of the antenna work and a carpenter set up the wall for the panel. Now that I have lost a bunch of weight I can get in and out of the attic much easier so can do my own work up there now.

In the attic are 4 ST-2, 4 ST-3 and 2 Discone scanner antennas, a couple wire dipoles for HF and a variety of other antennas such as ADSB, a couple UHF, a couple dual banders, and an 800 MHz antenna. (I might get some pictures this weekend when I go up for the annual maintenance.) They all go to the wall panel and then jumpers are used to connect to the radios. I had custom cables made for the jumpers to avoid adapters.

Between the radio cabinet and desk is a bookshelf. The top shelves have my handheld collection when not otherwise deployed as well as charging stands for some of my 2-ways.

The desk is an “Uplift” L-shaped standing desk with electric control. I have it set up so I can move it around the room on its casters and it is all self-contained as well. Beneath the desk is the UPS in a CPU mount that protects the 2 computers as well as the power cords and outlet strips.

I bought a large clamp-on monitor stand and slung it up underneath the desk. I use it as a shelf for things like a USB hub, network switch, the power supplies for the radios and monitors etc. This reduced the clutter on the desktop significantly.

There are two computers on the desktop, my main workstation, a tricked out Mac Mini 2018 used for my work-from-home job, web browsing, content creation and editing. While it has Windows on it via Parallels (I need this for the phone system at work) I use a separate Windows machine for the radio stuff. This is an Intel Hades Canyon NUC. Both computers are equipped with 32GB of RAM and 2-TB SSD’s and have 6-core i7 processers. The Mac has 2 32-inch HD monitors and the NUC has 32-inch and 27-inch monitors.

Also on the desk are my daily-driver scanners, an SDS200, SDS100, HP1, HP2 and a PSR400. The SDS’s monitor the local P25 systems as well as some local aviation channels, the HP’s are used for local GMRS, aviation and other channels as well as the channels used by the golf course community I live in. The PSR400 listens to the local rail channels.

Rounding out the desk equipment is the mic used for the local GMRS system on the right and the Mac’s mic in the center, used for my weekly live show. The desk phone is used for my work-from-home job.

On the wall in front of my desk is a large TV I use mostly for streaming railroad or aviation webcams via an AppleTV box, with the occasional news or baseball broadcast. To the left is another large monitor that also has an AppleTV. It also has a NUC 7thGen and I also use that mainly for video stream monitoring although I occasionally use as a backup for programming or our phone system. I also keep my laptop there for charging.

Since I have a weekly live show with my buddy from Scanner Master, I have several decorative wall hangings my wife made, these are used to reduce the room echo.

Since both the desk and radio cabinet are all self-contained and have casters they are easy to move around for maintenance. The desk extends up to a height tall enough for this 6’4” guy to stand without being hunched over. This also make it really easy to work on the wiring on the rear or underside of the desk. If I need to, I can disconnect a couple cables and take the entire cabinet and desk out of the room entirely. This was done most recently when we had the room painted.

The ability to easily get at the wiring and rear panels of the cabinet and desk make life a lot easier. Every wire and cable are labeled or tagged so if I did take it away I can easily restore it again.

As far as software goes, I use ProScan for virtual control and logging but I prefer ARC-xx for programming. Pro96Com is used to log control data activity. I am also watching ATCS Monitor for some railroad lines I am interested in. 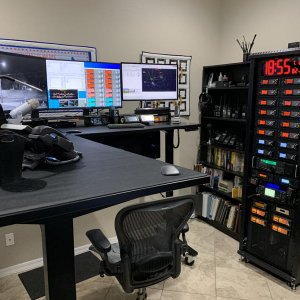 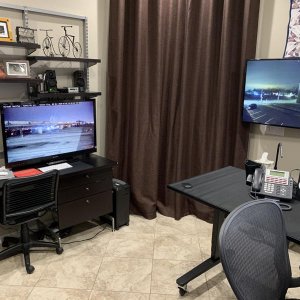 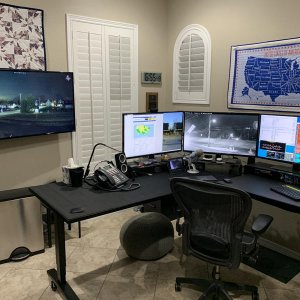 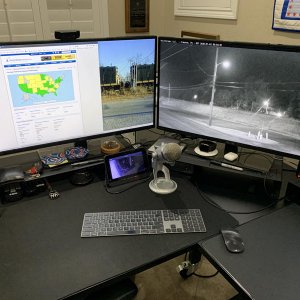 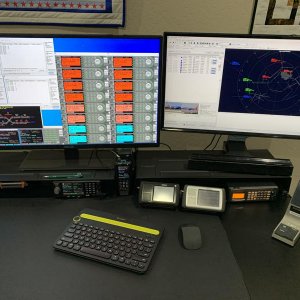 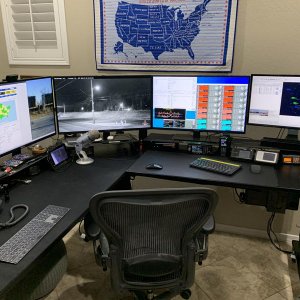 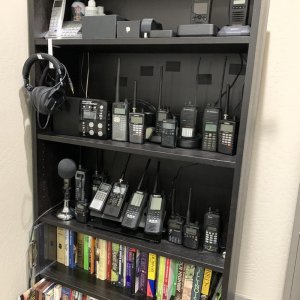 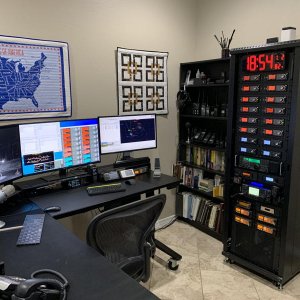 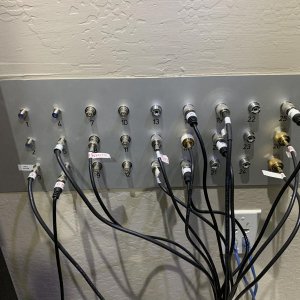 New Shack photos for 2020
I hope you all enjoy these pictures and descriptions!

Richard, that is one very impressive station! Clean and organized layout, excellent deign and what I would say is everybody's dream setup. Kudos, my friend. No wonder you are the director of the largest scanner club in America! 73, Dave K4EET

Always enjoy your updates. Just wonder how long it will stay in this arrangement...

For the past shacks and photos, use the N9JIG forum tag link to find the pages.

I think "Wow" would be an understatement. Very well done. My head hurts from thinking about it.....

You give me something to aim for.

Rich, you are, without a doubt, T.H.E. RADIO DUDESICLE! Hard to believe we’ve known each other 40+ years! My pleasure and honor to be your co-Director of CARMA.

Your shack setups never cease to inspire me!

Very interesting to see inside the cabinet.

Very nice work, can you post the antennas pictures?

As with all you different rack evolutions it always looks nice.

Very nice! WIsh I had the room (and money) for those kinda radios...

that just makes me look like a slob. I really need to clean my space up.

How about some pictures of the Antennas
I