N9JIG Shack Redone yet again (Spetember 2017), this time it will last longer?

My wife and I love to rearrange stuff and my shack is no exception. This time however I think I hit on the way it shall remain for a long while, or at least until we change our minds again.

I am going to go on a little tangent here first.

If you are unfamiliar with Elfa then get yourself over to The Container Store and check it out! It is the most awesome stuff this side of the Pecos. In my old home we had the older style "Hang off the joist" enamel white stuff but in this house we switched over to the free-standing system.

Elfa is an extremely flexible shelf/desk concept that allows one to rearrange things easily. You can add stuff on or remove stuff at a whim. I chose the Platinum/Encore series, the metalwork is all matching platinum silver and the woodwork is all ebony from the Encore line.

The stuff ain't cheap but it lasts forever and you can always add onto it fown the road.

We already had a 4 foot desk for the wife and I took that and added another 2 4-foot sections that fit against the rear wall of my office just perfectly. That wall is 12' 4" so a 12-foot system fit perfectly. The pieces all interlock and when finished you have a sturdy, good-looking system that can be configured almost any way you want.

First, here is a picture of the system before the radios and computers were put in.I put in the 746 to measure where I wanted to put the secondary desktop. 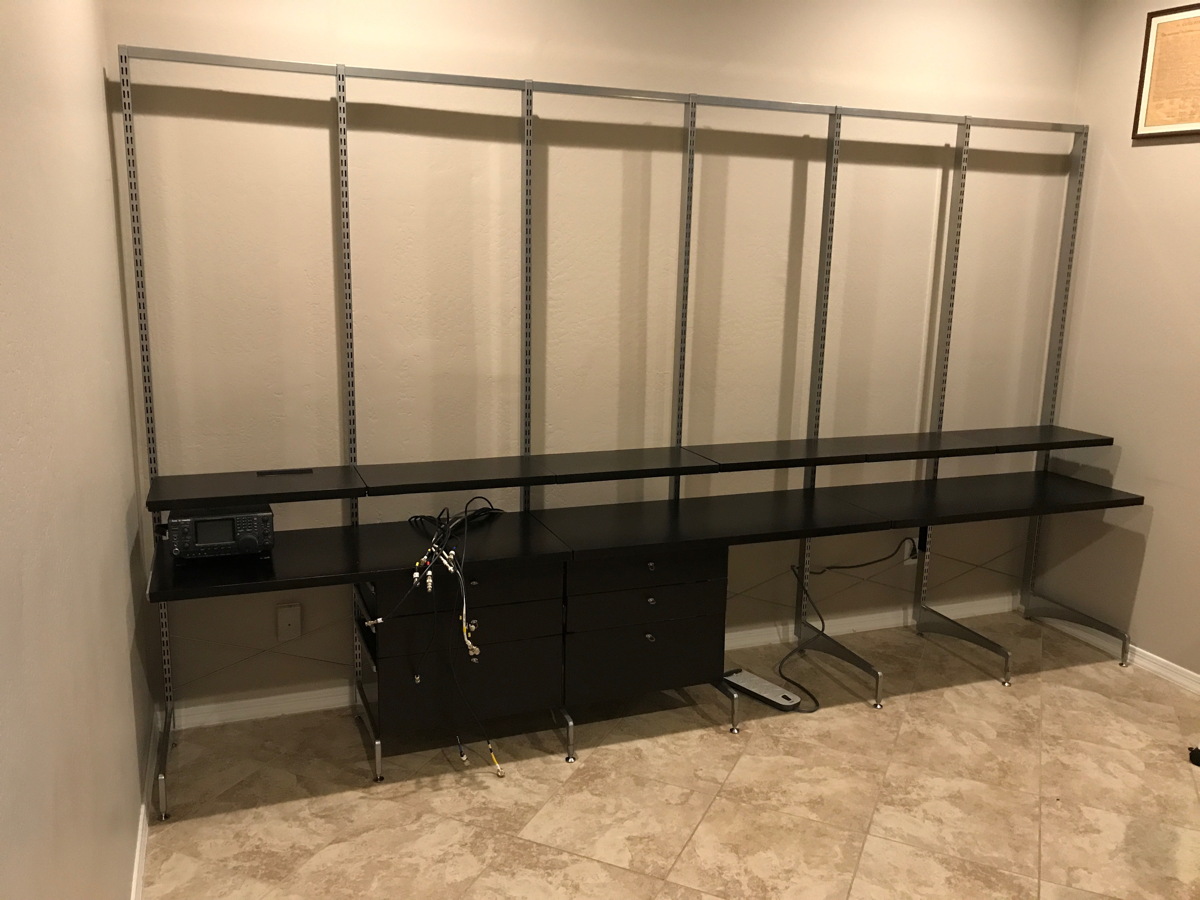 There are actually 2 desktops present. The bottom one is deeper. I placed the drawer assemblies to hid the wall cutouts where the coaxes come in and also where the bulk of the wiring is. On Friday afternoon we pulled the old desk out (it took up too much room and I didn't like it but my buddy's wife loves it now that it is in her office) and pulled out the rest of the furniture to make it easier to work. We then went to the Container Store and bought the extra desktops, shelves, brackets, verticals, braces etc. and brought it home.

Saturday we assembled the desk as you see it and put it in place. I then placed all my various equipment where I thought I might want it and arranged things a few different ways. Eventually I found the way I thought I liked best and took a couple pictures. Then I removed the upper desktops.

Next I started putting the wiring in place. I Velcroed 2 Stridsberg multicouplers on the bottom desktop behind where the scanners are as well as a PowerPole strip. I then put in the wiring for the desktop scanners, including antennas, power and computer connections.

I then put in the radios that are on the lower desktop, connected them all and replaced the upper desktops. Next I started wiring in the computers, the HomePatrols and accessories. Then I actually put in the computers and monitors as well as a USB hub.

After all that I rolled in the "Uniden Rack". (see https://forums.radioreference.com/pictures-your-shack-mobile-setup/356182-n9jig-rack-details.html) On the far left in the below pictures you will see that. Basically it is the same rack that I used in my prior shacks, it contains 12 Uniden desktop scanners (7 BCT15, 4 BCT15X and a BCD996XT) as well as a power supply, 2 multicouplers and a pair of 13-port USB hubs. The only thing I needed to do for this was to roll it into place (it sits on casters), plug in the power connector, connect the 2 antenna coaxes to the multicouplers and plug the USB cable into the computer. The rack fit nicely under the desk!

After I got all this stuff together I put in the extra shelves and brought back my wife's little desk, my Lazy Boy and other stuff in the office. 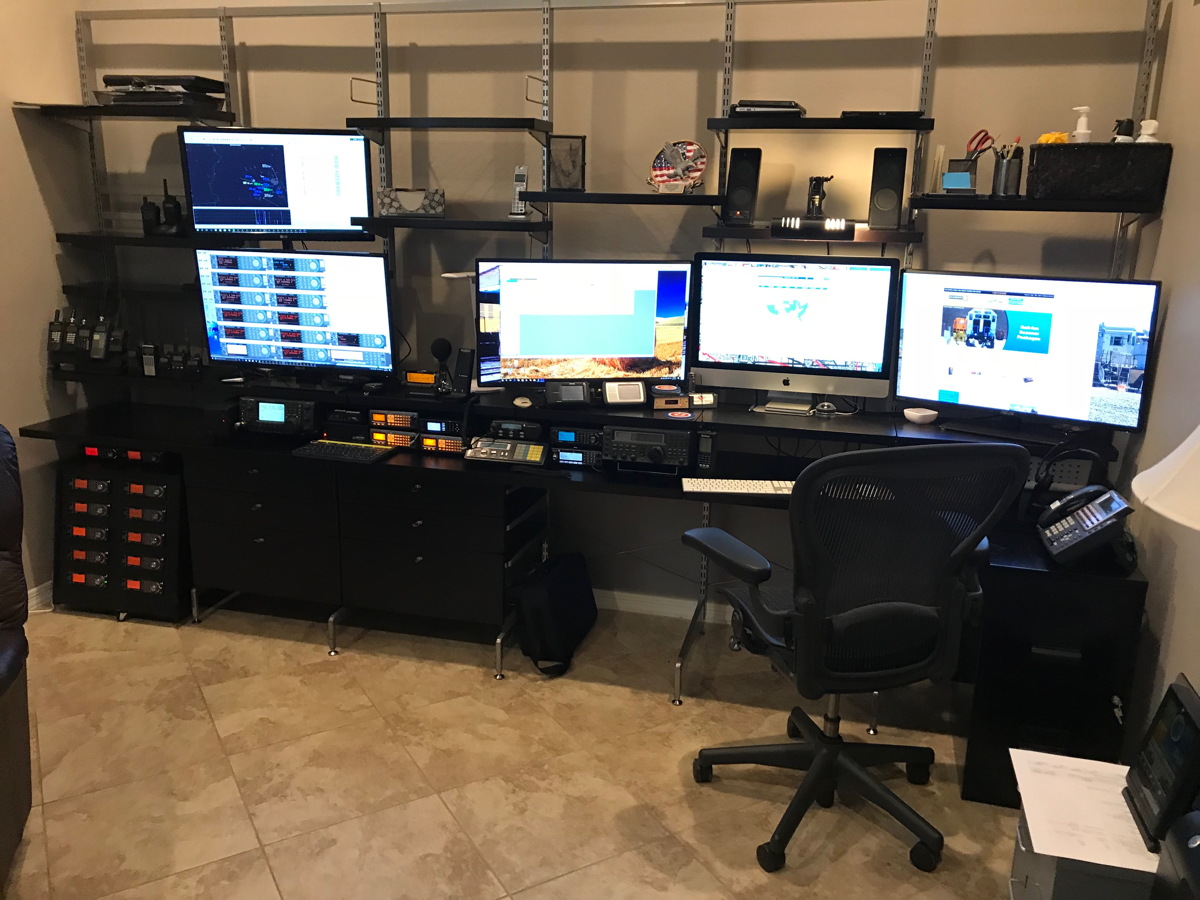 Above you will see the overall layout. My main computer station (iMac 5K 27inch with 2 32-inch monitors) is at the right. On the left is the Rack and the handhelds. In the center is the PC and other radios (listed below). The PC is an Intel NUC mounted to the VESA mount of the lower monitor (another 32 inch one) and the 27 inch above it is a second monitor on it. The PC runs the AirNav Radar Box on the top screen and a dozen or so instances of ProScan on the main monitor along with a few instances of Pro96Com, various ARC products and the like.

The chair is a Herman Miller Aeron. We had these in our 9-1-1 center before I retired and I loved them so I bought one after going thru a couple of cheap office chairs. It is worth the money.

Handhelds are numerous, but include things like a BCD436HP, TRX-1, BCD325P2, Unication G5, and others.

The wife likes it because it leaves the rest of the room wide open and she can see no wires. As every married man knows: "Happy wife, happy life".
B

I've used a similar shelf rail and support as what you've show in the picture. Mine still mounted to the wall though. However, The arm/cantilever mounting arrangement looks the same. As you stated, they are far better that the cheap white enameled ones. I'm thinking I may have had a precursor to what you are using.

I have to say, that is a fantastic looking installation. Excellent work!

How about a break down of what all you are scanning

bharvey2 said:
I've used a similar shelf rail and support as what you've show in the picture. Mine still mounted to the wall though. However, The arm/cantilever mounting arrangement looks the same. As you stated, they are far better that the cheap white enameled ones. I'm thinking I may have had a precursor to what you are using.

I have to say, that is a fantastic looking installation. Excellent work!
Click to expand...

Here is part of my original Elfa installation from years ago: https://forums.radioreference.com/pictures-your-shack-mobile-setup/99884-yet-again-n9jig-shack.html

At one time (2006 or 2007 time frame) we had the entire second bedroom/office set up with hanging Elfa, that included 7 of the full=size desktops and hundreds of linear feet of shelving. Of course we needed that kind of room in the CRT days...

Chronic said:
How about a break down of what all you are scanning
Click to expand...

Another cool setup, Rich! I'm beginning to think you have too much time on your hands...kidding, of course!
B

N9JIG said:
Here is part of my original Elfa installation from years ago: https://forums.radioreference.com/pictures-your-shack-mobile-setup/99884-yet-again-n9jig-shack.html

At one time (2006 or 2007 time frame) we had the entire second bedroom/office set up with hanging Elfa, that included 7 of the full=size desktops and hundreds of linear feet of shelving. Of course we needed that kind of room in the CRT days...
Click to expand...

Yes, that is the definitely the shelf product that I used. It's sturdy as all get out. It seems as I'm not keeping up though. Your photo was the first I've seen of the stand alone product and I'm WAY behind on scanners. Unfortunately, telling my wife that I need to keep up with the Jones' (or the Carlsons in this case) won't hold much water.

The original Elfa was solid compressed particle board covered in an enamel layer. It was heavy but very sturdy. It used small nylon pins with embedded nails to provide lateral stability. Since there was no way to really protect the spacing one had to customize the stability pins which caused multiple holes to end up on the shelf and desktop bottoms and it got pretty messy after a while.

The free-standing shelves and desktops are hollow but sturdy due to a honeycomb internal structure. This makes them extremely light weight.

Since the supports are always the same distance apart the shelves come with per-drilled holes for wire lateral supports and the desktops fit into the brackets so they do not shift. Since it is all free standing there is not damage to the walls. If I had another couple of feet in the office I could back it off the walls to allow access to the rear for wiring purposes but this works well for me.
B

I don't recall any pins, although the heavy particle board sounds right. I do remember running screws up through the brackets into the underside of the shelf boards to ensure that they stayed put. My modification didn't lend itself well to easy repositioning of the shelves. I must have had a really early design or a knock off of some sort. I still liked the shelf system though.

They sold the nylon pins with embedded nails at the store in 10-packs. They were about 3/8 inch high and roughly the same across, to fit inside the walls of the double walled brackets. I still have a bunch in my hardware bins someplace. Eventually I too used screws on the desktops when I didn't have pins around.
P

So to help you relieve bothh of these issues I'd like to invite you to my shack to work your magic.

Rich, any idea of the weight capacity of the Elfa shelves? I looked around The Container Store's web site, but didn't find any answers.
B

W9BU said:
Rich, any idea of the weight capacity of the Elfa shelves? I looked around The Container Store's web site, but didn't find any answers.
Click to expand...

This link might help but you'll need your metric/imperial decoder ring:

I don't know about the current stuff but I have actually stood on the wall-mount stuff. I am a big boy so that tells you something but don't try it at home.

Ah-ha. It says that each shelf bracket can hold 55 kilograms = 121 pounds. Thanks.
G

Which Elfa drawers are those?

They are part of the Elfa Encore series, see https://www.containerstore.com/s/elfa/components/elfa-decor/123

It looks amazing Rich. I wish I could keep my setup this clean.
I have wires every where. Over the desk, under the desk, around the desk.
I am always moving something around or adding more.
I second the chair, by far the best chair ever made.

This is one of the best shack setups I've ever seen. It is cleaner, neater and more efficient than many professional 911 centers I've been in over the years as well. How many external antennas are you running?