I have a Nex-Gen Rugged Spot. Until recently, I have used this almost exclusively in my house. More recently, however, I have been using it mobile. Right now I am simply using the OEM antenna, I have been giving some thought to getting an antenna and mount to use on the outside of my pickup truck. There are times when I want to park my vehicle and talk back to the Rugged Spot from my portable radio. What would be some suitable antennas for this purpose?

JASII said:
What would be some suitable antennas for this purpose?
Click to expand...

I would be more concerned about the CCR module in the hotspot being overloaded and going deaf when connected to a good external antenna.
J

I would be more concerned about the CCR module in the hotspot being overloaded and going deaf when connected to a good external antenna.
Click to expand...

The device remains on the suggested factory set frequency of 433. 000 MHz.

The antenna connector is an SMA connector.

The OEM antenna has what might be referred to as a reverse SMA connector, but I will have to refresh my memory on the SMA terminology.

I suppose overload is a possibility, but there is no way for me to know until I try it.

The more I think about it, I need to find out if the antenna needs to be resonant on 433.000 MHz only or if the 2.4 GHz wifi band is of greater concern. One thought I have had is that the actual transmission of the hotspot is on 433.000 MHz, so don't overthink it and simply get a UHF antenna and a mount with an SMA connector and be done with it. 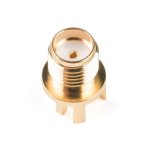 Any antenna that covers 430-450 MHz should work as long as you have the correct connector or jumper with the correct connectors.
I don't think the radio and wifi use the same antenna. If the hotspot only has one antenna connector then the wifi antenna is probably a ceramic chip type.
433.0 is the band edge of where auxiliary and repeater operation isn't allowed. You might think about moving.
If you want to be 100% sure about being legal then avoid the 431-433 MHz (weak signal) or 435-438 MHz (satellite) subbands.

For an inexpensive test any of the magnetic mount mobile ham antennas such as those from Tram, Nagoya, Bingfu, and others will work with the hotspot's UHF (70cm) radio. Just be certain to get one that has a cable with the correct SMA connector for your Rugged Spot. Run the cable out the window (don't crush the coax with the window) and stick the antenna on the roof. If you like the way it works and gives you the range you want, do something more permanent. No need to worry about the WiFi antenna: If you are connecting to a cellphone's WiFi or the vehicle's WiFi then the Rugged Spot's internal antenna is more than close enough to handle the WiFi connection. What you are trying to extend outside the vehicle is the 70cm signal... and an external antenna will do that.

If you have not configured the hotspot to require a PL tone already during RX, you should really consider doing that. Putting a tone on the outgoing TX would be courteous for others.

I also agree with what nd5y noted above.
N

vagrant said:
If you have not configured the hotspot to require a PL tone already during RX, you should really consider doing that. Putting a tone on the outgoing TX would be courteous for others.
Click to expand...

You can't put PL on digital formats and his hotspot doesn't do analog.