I just bought a 2000 Chevy Suburban and I want to mount a switch box, siren and eventually a 2M radio. I have an idea but I am not sure how to go about it yet.

I am looking for mod ideas and what type of material to use. The 2000 model has a cassette deck in the middle console. I have removed that. My thinking is to modify that area of the console. Not sure if the switches or 2M rig will go there. I do want to try the siren in the middle though.

Here is a picture. 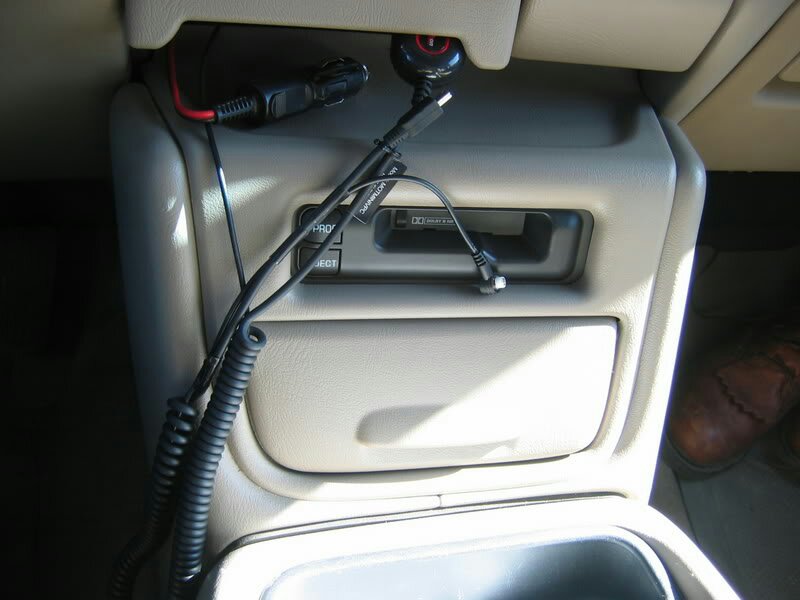 My brother in law mounted an Icom F621 UHF radio in the cassette deck slot of his 2000 or so GMC pickup. Worked pretty well and looked almost factory. Wish I had some pictures of it.

This is how I have my radios installed in my 2002 Yukon XL (same as a Suburban). Works quite well for me.

If you could tell me what you did to modify the middle section for those radios you will be my new best friend lol. This is exactly what I want to do but not sure to go about doing it.

I used a sawall, cut out the front, then installed to supports, of brackets from True Value on the inside, mounted to the plastic shell. From there I secured the DIN box to the brackets, secured the radios in, and a friend of mine cut me a piece of black plastic to cover up the bottom hole. The top hole is where the cassette deck was, I just cut it wider and slipped the 996xt in, the bottom was where that storage space was, which I had to entirely cut out. It is not as strong as I'd like, but it works. I wish I had shot photos of how I did it.

I gutted the whole inside, rather than remove it. I just took the Sawzall and cut straight into it, removed everything, then worked with the empty shell.
S

That's what I was thinking. So you cut out all of the guts and made brackets.

Stimpy911 said:
That's what I was thinking. So you cut out all of the guts and made brackets.
Click to expand...

Yup. I spent maybe $15 on brackets at True Value. They don't need to be heavy duty at all. There is essentially no weight to the radios. Took me a few days to figure it out, but once I did, it only took me 2 hours or so to get it all together. I spent more time cutting , to ensure I wasn't destroying the shell, than I did assembling.

Once you gut it, it will feel weak and wobbly. This is why you need to secure it with brackets attached to both sides of the exterior walls, to make it stable again. Flat head goes on the outside of the walls, facing into the vehicle cabin. I didn't think that through initially , it was easier to have the nut on the exterior, but forget how it looked, my daughter kept whacking her ankle into it some how in the passenger seat.
S

What did you buy for the brackets.

My idea is to reuse my brackets from this jotto desk. Take plastic and put behind the brackets and then find a way to secure everything in place.

Stimpy911 said:
What did you buy for the brackets.
Click to expand...

The basic, cheapo, galvanized straight brackets and small (single hole per side) 90º brackets. Once you see them in Home Depot or True Value it'll make sense and jump out at you. I really wish I had photographed how I did the work. my apologies.
S

That's okay. Your pic is the closest thing I have found to date.