spikestabber said:
have yet to see anyone on here photograph them or schematic them out however, or how they physically work...
Click to expand...

Uniden pretty much reuse the filter design in their scanners. Signal enters thru the diode at the left, D4 for the filter at the top, and exit thru the diode to the right. The processor sets a voltage to the diodes to make them conduct and let the RF pass. It uses several pole filters in series to make them pass the whole frequency range for that band but still attenuate enough of other frequency bands, and still try to hold a 50 ohm impedance. It's not perfect, the impedance are way off at some frequencies and the signal attenuates a bit much, but good enough for non-professional scanner use. Using external filters and an amplifier will improve performance. 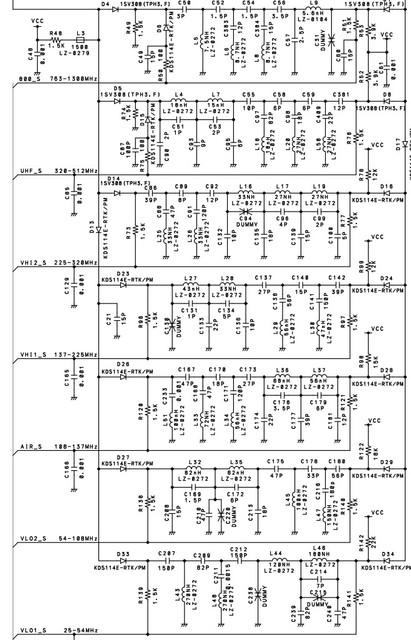 Thank you this makes a lot of sense actually. I was rather impressed with the little network they had going on in there. It's going to require a lot more attenuation with the ridiculous broadcast FM we have around here, for kicks I tuned to one and it measured something like -47. Would be expecting a miracle from this circuit by itself with for example the popular Larsen tri-band.
S

Golden horseshoe of Ontario, theres a good 50 or so high powered broadcast audio stations within high power receive and a lot more cellphone towers. I admit its not anywhere near as bad with my fixed base sds200 with discone, but mobile when everything is bouncing around with multipath everywhere you easily blow out the frontend in any heavy dense urban area and harmonics all over depending on where you are...

The problem mostly affects VHF, most things in UHF are good, and the filter fixed it.

People expect a WideBand Receiver to work as good as a $8000 purpose built radio?
In the 70's and 80's scanner traffic was just as clear on frequencies several megs away as the frequency it was on.
S

I don't expect a whole lot from something thats only really supported with the antenna thats included in the box, its only logical a good antenna will blow out the frontend when nearby a very strong field on the adjacent band, I understand the entire SDR concept to understand why these receivers are more sensitive to this. Add a notch filter, fixed, nobody is complaining, maybe their next scanner will be something in the $1200 range with a good FPGA core based decoder, at least then most of the entire scanning core could be changed irregardless of the frontend hardware should its only core designer sadly pass away suddenly. I would pay for something like that too.
S

I have noticed a lot of people defend these radios, I mean they aren't exactly a low volume product that costs $8000 intended for industrial use either but consumer products made in rather large volumes, therefore it is not impossible to make higher performance wideband receivers at lower cost as we all know & see in the DIY world, especially when it comes to SDR. I would expect that $8000 purpose built radio to come with an iron clad support contract too, which I'm sure where much of the cost to assemble is negligible.

That is because they work for us.
Motorola does that also for a per month per radio price add on.

spikestabber said:
I have noticed a lot of people defend these radios, I mean they aren't exactly a low volume product that costs $8000 intended for industrial use either but consumer products made in rather large volumes, therefore it is not impossible to make higher performance wideband receivers at lower cost as we all know & see in the DIY world, especially when it comes to SDR. I would expect that $8000 purpose built radio to come with an iron clad support contract too, which I'm sure where much of the cost to assemble is negligible.
Click to expand...

Scanners aren't exactly high volume products either, they are nitche market. My SDS200 is the #18,000 someodd. Is it the 18,000th made that month, that year or from the beginning. 1 person doesn't do everything pre-production. Obviously Paul did a lot of the idea work and the "what do we want it to do work" but I seriously doubt he did the original schematic, breadboard work, the circuit board design, case, programming, pre-production models, etc. So I don't believe it was "all one man" nor that now he's gone, the product is dead in the water.

I certainly do believe Paul was the driving force, idea man and "father" of the home patrol series of radios. He did a lot of the "legwork" to get them designed and built. But there are/were lots of others in the chain and all knowledge wasn't lost when Paul passed.

An awful lot happed in the last 2 years since he became terminal and died. Pamdemics and all. There is now, someone trying to step into his shoes and move on with the product line. At this point, I can't imagine that the SDS series is now DOA and nothing will ever be updated nor will new products come out.

It's my understanding engineers behind the development of the SDS series are in Japan. Paul used to travel there to meet and consult with them.