The future of lightning protection

FTA: they blasted the laser some 150 metres into the sky

During six hours of thunderstorms between July and September 2021, they blasted the laser some 150 metres into the sky, just above the 124-metre tower, sending bursts of infrared light at a rate of about 1,000 times per second.
Click to expand...

They don't mention a duration. So does that thing run all day during storms? How does that beam compare to the beam that people aim at planes and helicopters with the cheap store bought laser pointers?

wtp said:
FTA: they blasted the laser some 150 metres into the sky

Probably best to ask the researchers. As commonly happens, this stuff gets developed in a 'lab environment'. Adapting it to real world use is a completely different process. I'd wonder about how much energy it takes to drive that system, and how that would work at really remote sites that are not on utility power. Probably those would stay with traditional lightning protection systems.

I'd love to know more about this. Obviously fricken' laser beams (or any other type of laser beams) are not my area of experience. I'm wondering if the laser ionizes that little bit of air/moisture in it's beam out to 150 meters and that conducts better than other paths to ground. 150 meters might be as much air/moisture as they can ionize with the size laser they have.

I don't expect this will be replacing traditional lightning protection systems in my lifetime. But it's interesting none the less. And, I got to use the term "Fricken'" several times, which is always a bonus.

Seems like something Ms. C. Frostbite could enlighten us on with a humorous, entertaining and educational story.

Explorer of the Frequency Spectrum

mmckenna said:
Seems like something Ms. C. Frostbite could enlighten us on with a humorous, entertaining and educational story.
Click to expand...

I had the same thought.

I don't think @Lauri-CoyoteFrostbite usually peruses this sub. I tagged her, to get her attention.

"Do you expect me to talk?"

"No Mr. Bond, I expect you to conduct"

I guess I wasn't far off: 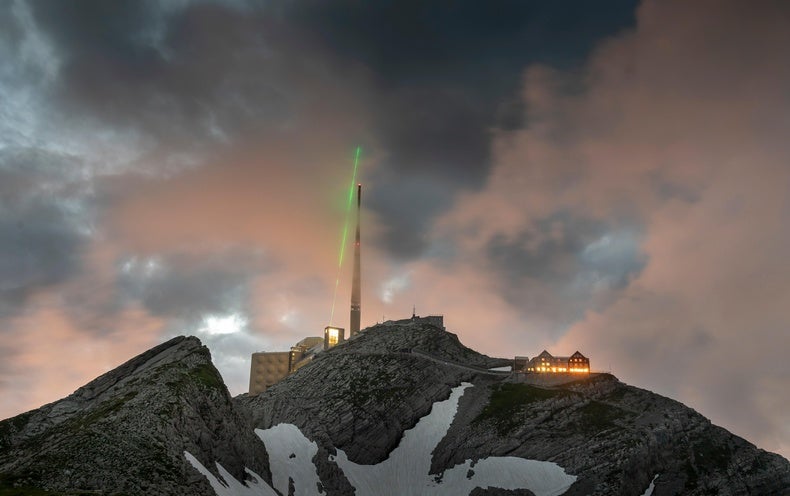 Scientists Fire Lasers at the Sky to Control Lightning


When the laser is fired, the air molecules in the beam’s path are stripped of their electrons in a process called ionization. This transforms the air, which is normally insulating, into an attractive point for the lightning to hit—effectively creating a giant, temporary and controllable lightning rod in the sky above the area to be protected.​
​
Says it needs about 1000 watts of power.

And we shall call it Zeus.

I wonder how difficult it is to land half of a 737.

My problem is I have a lot of lightning stories- but fortunately for me, no recent little lightning tales.
This one, below-- its probably one of my most memorable experiences------

I like this photo - I spent a hairy evening in this hut (its actually a cabin perched near the summit of a 13,000+ foot mountain) during what could only be called something out of Modest Mussorgsky's ** "Night on Bald Mountain." We mostly perched on stools, the legs of which were mounted...


The use of an ionizing laser beam looks like a neat (ie: expensive) way to deal to deal with lightning- though certainly not a phenomenon unknown since -like forever.
For instance, there is an old smelter stack not to far from me that old timers relate regularly drew lightning out of the clear sky.... not because of its height but because of the ionizing mineral laden gases it shot into the air. When the smelter went SK that stopped, though its 360-some feet still make it an awesome target during electrical storms.

I have never experienced this myself, but I have heard tales of lighting coming down chimneys and wood stove flue pipes here in the high Rocky's... needless to say all my stove flues are ground'd thru heavy copper cables,

That’s very interesting! As I suspected, it’s infrared, so it won’t be blinding anyone unless they are wearing NVGs, which is definitely still a factor. Creating the path of least resistance isn’t always trivial and there will be many MANY variables at play in real world scenarios. Also, the statement “…If there’s enough energy to power it.”, is disconcerting…

Oh boy! The first thing that came to mind when I saw this photo was the scene from "A Christmas Story" where the kid got his tongue stuck on the frozen lamp post. It's no wonder my wife never takes me anywhere.