The Radio Amateur's Hand Book by A. Frederick Collins

The Radio Amateur's Hand Book
A Complete, Authentic and Informative Work on Wireless Telegraphy and Telephony
1922 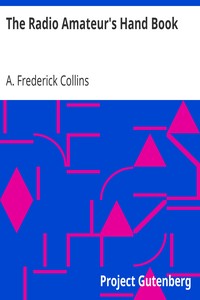 The Radio Amateur's Hand Book by A. Frederick Collins

Absolutely marvelous reading, available in a variety of formats. (I use the Overdrive app.) Free for the download. Youngsters under 50 probably won't appreciate the beauty of the work.

As an aside, also read Harold Beverage's 1922 QST article "A Wave Antenna For 200 Meter Reception" W2XQ.com : Amateur Radio for the beginning story of a wonderful antenna, if you have the room.

I just looked him about a week ago. The attached picture showed up on a blog I follow. So I was curious if it was the same Collins as the radio line. (It's not).

Collins Radio was founded by Arthur Andrews Collins who was born a year after the date on this photo.
L

That's quite a photo.... But, but except for the obvious (like the antenna current meter)- I am at a loss to identify any parts of that assembly that would do 'phone in 1908.... Maybe its a form of modulated spark ?..... Is that a bank of light bulbs in series on the wall as a 'power meter' ?

(me thinks that chap is just talking on a landline telephone)

Fessenden made the first AM phone transmission in 1906. He used an alternator - not a spark transmission. I don't see a morse key on the table. Or, conditions were bad that day an he was just making a telephone call.
L

Fessenden was credit'd with the sending the first meaningful voice transmissions- most notable was his 1906 Christmas Eve broadcast to ships at sea that night. But he used a powerful alternator with a very dangerous modulation system.

RF was passed directly from the alternator thru a carbon element microphone ! to the antenna. Talk about a hot mic !
One of the below pictures shows just such a later "advancement" in that design-- note how far away from the RF source the operator sits. These microphone often carried so much juice they were water cooled.

That 1908 photo show the operator holding a telephone transmitter while listening to something on a ear piece...... I doubt they had duplex in those days.

Still, all in all, it was remarkable what the technology accomplish'd in the pre-lectronic era-- all this was mechanical stuff. Truly Steam Punt- right out of Jules Verne.

Reginald Fessenden's epic Christmas Eve broadcast was not over an Alternator, but instead on a State-of -the (then)- Art modulated spark transmitter.

What makes my error especially bad is I wrote about this very occasion just last year (October 4th) --wrote it on the observance of his 132th birthday.

. It seems there comes and goes a fascination with Morse Code by modern hams. I think it fascinates us to be able to have our own special way of communicating that others don't understand.... I know, even in this day of computers and personal data devices, quite a few of the younger generation...