There used to be loads of APX8000 radios on Ebay and all of a sudden they are gone. Anyone know what happened?

snowmn said:
There used to be loads of APX8000 radios on Ebay and all of a sudden they are gone. Anyone know what happened?
Click to expand...

No there were at least 15 on there from different people and the next day zero.
M

Noticed the same thing, somebody must have bought them all up. Could have been somebody from overseas, I know that happens occasionally.

Tick the box to search completed listings and see if they sold or were pulled.
S

Thunderknight said:
Tick the box to search completed listings and see if they sold or were pulled.
Click to expand...

Thanks for the tip. So it looks like they were all pulled. Interesting.
M

Thunderknight said:
Tick the box to search completed listings and see if they sold or were pulled.
Click to expand...

I didn't know that. Thanks for the info.

Motorola finally starting to wake up? Or eBay?
I

Were those accelerated life testing units or parts radios?

Nick DeLuca aka "Watchbuddy" re-incarnated? Come on, something had to give with all of these "No Tags, but Legit Serial Number" radios floating around out there. I made this observation on, well, another forum and the thread was removed as being detrimental to the sellers!
Last edited: May 2, 2017
S

One can play with those leaked tools only too long before someone sends a radio into the actual depot for service, when you get several to a hundred it's going to raise suspicions.

It wouldn't surprise me if that was the case since sadly first responders are buying them and when a issue arises they call the one and only mother M for a round trip.

When you have first responders buying these type of radios no tags forced esn numbers to monkey flashes that not even the federal government can order in certain overloaded fashions eventually it'll get back to the real creator. Speculation but probably something along those lines occured and MOL legal got involved if they were tagless.

The problem is people are monkeying the firmware, flashes illegally then throwing a legit firmware update to clear the monkeying. But invalid esn's, tagless, dev alt, overlord bogus flashes it'll catch attention specially if a few volunteers buy a bunch then the chief or his boss goes to the sales rep and says well I can buy 10 of these 8000s for half of what you sell. Sales man will ask show me so.

Since last I knew the 8000 was only available to public safety and large entities, at least at one point not sure about now.

It might offend some but I believe whatever occured it was for the better. Those units do not need to make it into the public safety sector which unfortunately they are as well as older equipment with a Guangdong special dev test housing cleaned up.
F

well there is a certain few groups where the seller is selling known ALT and parts built radios with whored out flash codes and counterfeit or no tags.. The people who are doing it are the ones running the group...
N

FFPM571 said:
well there is a certain few groups where the seller is selling known ALT and parts built radios with whored out flash codes and counterfeit or no tags.. The people who are doing it are the ones running the group...
Click to expand...

There was a story circulating a few years back, supposedly true, about a fellow who made the hamfest circuit selling late model, new Motorola HTs. Seems this fellow had a buddy that worked in Motorola's shipping department. When large entities order radios by the hundreds or thousands even, it seems that big "M" makes a couple of dozen extra to account for early failures replaced under warranty. The story says that after a couple of years, there were lots of radios left over, just sitting in the warehouse. This buddy would ship them on the sly to this other gentleman who sold them at good prices at hamfests and, unfortunately, to public safety agencies. Seems that one of these agencies took some of these radios to a local Motorola shop and somehow, the serial numbers got back to Motorola whose records showed that those radios were never shipped out of the warehouse. A little investigation and the culprit was identified. The fellow selling radios at hamfests managed to avoid jail, but it was costly, to say the least. There was one model of Motorola portable that could be assembled from parts for about half of what it could be bought for. I personally know a fellow with a Motorola parts account who says he sold quite a few parts radios. He bought trashed, damaged ones to use for legit serial numbers. Of course, the radios had no tags. Or, seems like he printed his own.

i Admin many groups and Enforce the rules and one is POST the model and serial numbers of ALL radios to be sold many don't like the rule.i see many with no radio tags and have 1234ABC123 Serial numbers.
K

And now there is none.
K 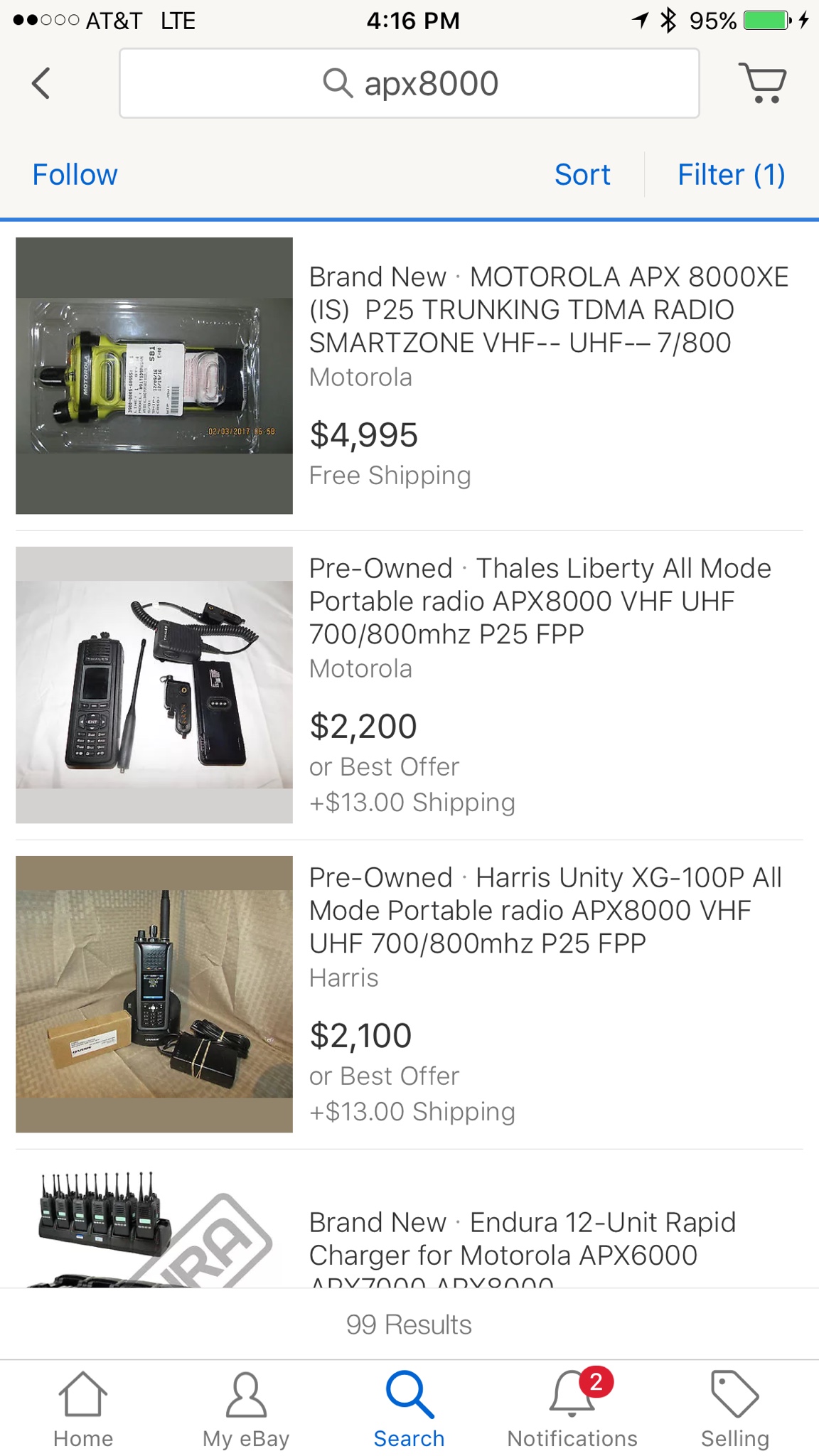 Just took the screen shot. So after looking, there is actually only one apex8000


Sent from my iPhone using Tapatalk
Last edited: May 3, 2017

Interesting how several "key" numbers appear to have been camouflaged.