I ordered a VHF-UHF diplexer (Stellar labs 33-2230) so I could run both my DJ-130 (for VHF) and my 800-900MHz yagi (for UHF) simultaneously . Received it, plugged it into my feed lines and it looked like everything was running great. Getting a strong signal from my Yagi, and a reasonable signal from my DJ-130. Then i noticed the scanner was no longer picking up a 300 MHz system. Checked my wiring, etc....all good.

Might open it up and see if I can tweak the components to push that VHF cutoff much closer to 400 Mhz.....

(and i just noticed this should have gone in the subforum..sorry!)
I

Any EE on here that can help decipher the VHF circuit on this? From what i can tell it's got a high pass and a low pass section....oh for the days when you could read the values of electronic components..... 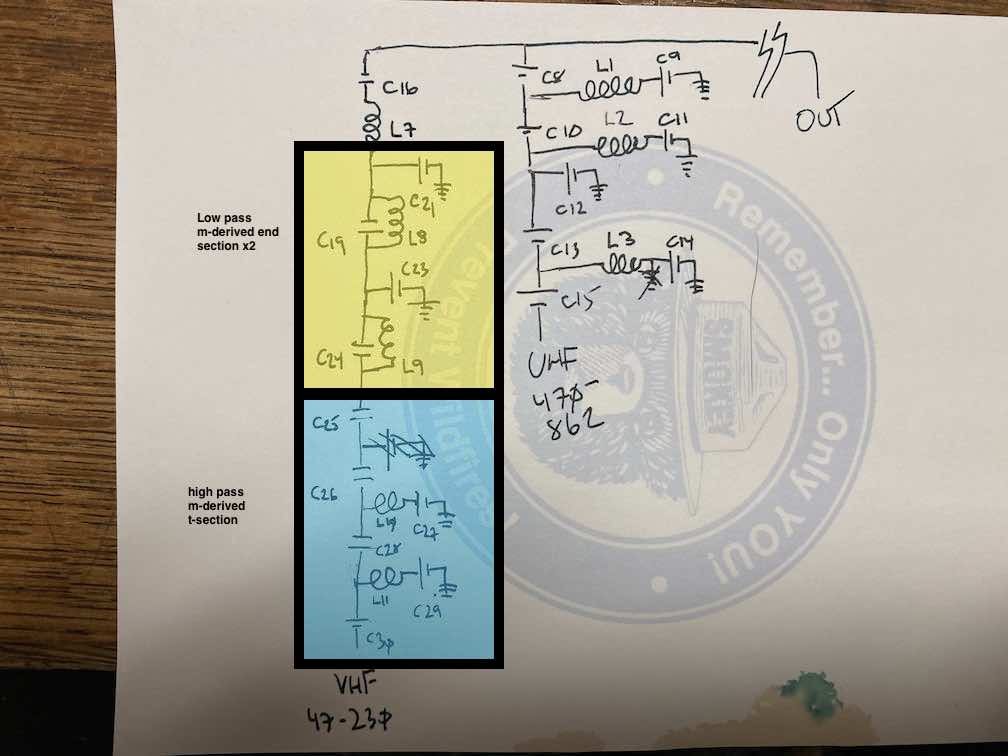 The yellow box looks like a bandstop filter. L8 and L9 will pass any low frequencies and C19 and C24 will pass any high frequencies. Both coils and capacitors attenuate the most at a frequency between high and low, probably 300Mhz will have a hugh attenuation. For some reason they wanted to block out mil-air, possible it was inteded to be used with another mil-air antenna with it's own 200-400Mhz bandpass filter.

You probably wanted to get a plain low pass and high pass filter that split at 390MHz or something like that to make the discone receive mil-air.

Try and solder a jumper from C25 to OUT to make it low pass and perhaps it will work a bit further up in frequency. Second attemp would be to make L10 and L11 less inductive, if it's air wound coils just solder a jumper over a few turns to make it work with fewer turns and less inductance. If the coils have 8 turns then make it a 5 turn.

A cheap VNA analyzer would be a great help when dealing with filters.

Thanks Ubbe! I've got a VNA on the way...as soon as it gets here i'll start tweaking....
I

NanoVNA acquired and here are the preliminary results. One interesting tidbit is that while i can get the ~380Mhz digital system I want w/ the discone, i can't receive it w/ the combined feed (or the UHF yagi) even though it doesn't appear to be a huge null there (w/ the caveat of the accuracy of the VNA freqs...). Now, it's entirely possible (strike that....make it probable) that i'm on the edge of the reception window such that it wouldn't take much attenuation to lose the system. Next step is to try some of the things Ubbe suggested...

Ok, so you are measuring the S11 return loss and those looks to be fine on the discone and yagi.

The diplexer has to be measured with S12 mode as a tranmsission line, connect Ch0 to the VHF port and measure and then do the UHF port while having the Ch1 connected to the diplexers output.

I believe the C16 might be a coupling capacitor and the L7 are used to isolate the VHF part from UHF so it wont load and shortcircuit the UHF output.

While i'm waiting on my SMA-F male adapters to get here, I've been playing around with SVC Filter Designer and LTSpice trying to reverse engineer the VHF filter since none of the caps are labeled and I have to make (slightly) educated guesses about the inductance of the coils. I tried modeling with lower values of L10 and L11 but it cost a lot of sensitivity >100 MHz. However, if i modify L8 and L9, as well as their caps apparently i might be able to stretch out the high pass to the 400MHz target. Now i realize that this doesn't take into account how this section is incorporated into the UHF filter but it's a start.

The green trace is the model for what i THINK the VHF filter is doing, the red trace is the same model with L8,L9, C24, and C19 modified.

Apologies for anything blatantly stupid, this is a fairly steep learning curve for me!