How did you get interested in radios or public safety?

I got interested in radios when my dad asked me to tag along on calls for LE ( he was a deputy sheriff ) for the largest county in Oklahoma . after that I started to hang out by his vehicle and listen in on the calls the dispatch put out . after that I was hooked and bought my 1st 20 ch RS desk top and put up a cush craft ringo ranger 2b and I used a flat roof of my apt building for hight it was roughly 30ft up . if im not mistaken his mobile was a maxtrac vhf 16ch and used a Larsen 1/4 wave on the drivers side front fender . Any way I've owned several different scanners and now I'm using a Grecom psr600 with a tram 1411 erected at 16ft using rg6x feedline .

I originally, got an RS handheld scanner back in the 1980's. It couldn't hold more than a few frequencies(less than 10). Somehow, I kept it in storage for 30+yrs.. Despite living in Minnesota just off Lake Superior for five years Until 2016. When I came across it again. I upgraded to the BC75XLT. A year, after that. I upgraded to the BCD325p2. That is what I have used ever since. With no plans to change scanners, again.
C

I got interested in radio around 5 years old. My dad was an Atlanta LEO and I use to sit in his unmarked car and listen to his radio in the carport. I got my first crystal based scanner when I was around 9. I started collecting old radios and started soldering and trying to fix them. By 12, I was repairing friends broken radios, stereos and tv's. We had a Radio Shack close to the house where I would test and buy tubes and solid state components to fix radios and tv's. By 14 I was installing aftermarket stereos in friends and neighbors cars. Went to college and took engineering which included electronic, mechanical, electrical and structural. After college I went to work at a missile plant where I assembled, repaired and tested guidance systems of the laser, infrared and gps nature. My specialties were the laser guidance systems on the Hellfire and Maverick missiles. I retired in 1997. Although I was in defense electronics most my life, I was never in the radio field. There are a lot of very knowledgeable people on RR that have been in the radio field all their lives and know what they are talking about. You can find the answer to anything radio related here on RR. I am still a radio freak and playing music and radios are my two most enjoyable hobbies.

I was interested in it almost from day one. When I was a baby, I would sit in the front of the cars my parents and grandparents had and tune around on the radios in them. When I was 4, I got one of those Remco(?) AM transmitter things for Christmas, and had a lot of fun with it. But one thing really kicked it into high gear, we became friends with this family who had Zenith SW radios built into their house, 3 of them, and almost as soon as we started going over there, I would tune around and see what I could get. As time went on, two of them, the one in the dining room, and the one in the parent's bedroom died, and only the living room one, the best one anyway, lived on until I was in high school. My dad got the police monitoring going when he brought home two of the Bearcat "Little Tiger" convertors. A ham across the street threw one off freq so fire could be heard on one, and police on the other. By the time I was 14, I had several SW receivers, none of them even remotely "good", a bunch of those tunable Regency MonitorRadios, and two Bearcat scanners. The MonitorRadios would make to Las Vegas, where they gathered dust until the MGM hotel fire, and they all came out of the closet to supplement my new at the time Bearcat 210 and Bearcat III scanners. Most exciting thing I've ever heard live. At my peak, I had over 40 handheld scanners, a couple of them very rare oddballs that came from overseas and were rarely seen here. Most of those are gone now, a few are missed, most not.

In the 50s & 60s my father was in the USAF and worked in the Security Service as a radio & antenna repair man. He taught me a great deal about both and I learned morse code from him as well. 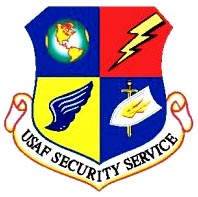 Most of the places he worked at looked like this:

I used to be riveted to the TV.

RadShackFan said:
In the 50s & 60s my father was in the USAF and worked in the Security Service as a radio & antenna repair man. He taught me a great deal about both and I learned morse code from him as well.

Most of the places he worked at looked like this:

Had one of those at one of my duty stations. It was funny going in there to work on some of their stuff, that they were not legally allowed to open up, that I was. I really wanted to learn more about the system, but I didn't have need to know.
O

I kind of stumbled across listening to police comms when I was in high school back in the late 60s. I had a multiband tuneable receiver and was just checking things out and found Minneapolis police.

I got interested in the fire service when in 5th grade. The Minneapolis schools and fire department had a public education program on fire safety where they would spend an hour or so each week on that. Plus I had a cousin who was a volunteer firefighter in Bloomington MN. Was neat watching him race off to calls and then come back with stories.

After getting out of the army, I joined our local fire department as a volunteer. Rose up the ranks to be the volunteer fire chief and my regular job was a deputy state fire marshal. Then our fire department started changing directions toward full time firefighters and I was hired as fire chief. So 16 years as a volunteer then 23 as a full timer. After retiring I was asked to do photography, Public Relations and fire investigations with the fire department just south of us. So its 46 years and counting.
You must log in or register to reply here.
Share:
Facebook Twitter Reddit Pinterest Tumblr WhatsApp Email Link
Top