I have been using sorcerer and pc-hfdl to successfully decode HFDL I find on SDR receivers but I have recently found a signal that looks and sounds exactly like HFDL but doesn't decode to anything. I know the transmitter is a "foreign military entity". Could it be that there is a secure version of HFDL meant for military use that doesn't decode? Could it be a problem with fonts? Do you know of another HF upper sideband signal that I could be mistaking for HFDL?
A

dogsbody said:
I have recently found a signal that looks and sounds exactly like HFDL but doesn't decode to anything.
Click to expand...

What frequency are you getting this on ?
D

they move around but mostly it's on 5531khz usb at night and 12850khz usb daytime and it's middle east origin so you need a rx in europe.
K

If it's not on this PDF file that has an extensive list of HFDL frequencies, then it isn't...

You can search for the frequency on the UDXF groups.io mailing list page, once you're a member...

The Utility DXers Forum - UDXF is centered around the exchange of news and information relating to "utility" radio stations and signals, below 30 MHz. What kind of stations are covered? Actually everything in the range of 0- 30 MHz with the exception of Broacasting Stations, Pirate Stations...

this isn't aviation and it isn't civil. I don't expect you'll find it on any freq list. You won't likely find them active if you try to find them live but I have a lot of recordings of this. I just want to know if I should stop wasting time trying to decode something that can't be decoded with the usual tools. I've already said too much.

so back to my original question. can hfdl be encrypted so it can't be decoded by the usual software and is there another signal that looks uncannily like hfdl but doesn't respond to an hfdl decoder?

maybe I should have put this in another forum but I put it here because this is where the HFDL seems to go.
K

I've never seen reports of encrypted HFDL. As I said earlier, if it's not on the PDF I gave earlier, it's likely not HFDL. HFDL works on fixed frequencies that generally don't wander.

Encryption of any kind can't be broken all that easily 'with the usual software (whatever that means)'. This site is in the US, by the way.

The UDXF is a far better place to report things like this. There are any number of dig-experts that can dig into a signal to find out what it is.

by the usual software, I just meant what we all use to decode HFDL. I've used three readily available programs and it doesn't decode to anything. and what's to stop a government, or anyone for that matter, from purchasing HFDL encoders to send their sensitive data simply because they consider it an upgrade in reliability and security over plaintext on single side band HF? It may sound absurd in the 21st century, but I've seen plenty of examples in the past of entities playing catch up and they're always decades behind.

anyway I don't expect to decrypt this stuff if it is in fact encrypted. I only want a little assurance that I have all I can do with it so I can move on to something else. I will look into UDXF. thanks for the suggestion.
D

moderator can correct my last paragraph. I added the word 'done'
anyway I don't expect to decrypt this stuff if it is in fact encrypted. I only want a little assurance that I have done all I can do with it so I can move on to something else. I will look into UDXF. thanks for the suggestion.
K

12850 is neither civil nor aero related, at least according to the UDXF logs. The North Korean Diplomatic service runs a sometimes-active HF network at ARQ/600 baud; as that is one of the speeds HFDL can use, I can easily see how it could be mistaken for that.

Enigma is the name of a sub-group within the UDXF that tracks (basically) signals that can be decoded but not read. Often it's assumed that it can be military, intelligence services, diplomatics and other applications, but it's never really sure as to what the signal is sending

There are several very expensive decoding apps that have analysis tools generally not available to the average hobbyist. These include Hoka Code 300-32, Krypto 500 and 1000 (no, not Superman's dog), and Procitec's go2decode and go2monitor. But even these won't break hard encryption

My first thought on that 5531 frequency might be a high speed PACTOR or STANAG mode, but that's pure guesswork. Mike
D

I would be willing to email copies of this to anyone interested, but private messages are not allowed until unknown number of posts and I don't expect to be hanging around much longer. and these different frequencies are all the same net, same callsigns, same guys doing the comm chat in between digital bursts. as I said, they move around.
K

About what time (in Zulu- or UTC, if you prefer) are you hearing this? I can pass this along (anon.) and let the digital masters have at it. They will find out, for sure. We can even do a rough direction finding with the Kiwi SDR network

It's 24 hour a day operations and they are not usually very active. I have so many recordings I just try to keep up with them on the hour from 1500z to 0200z on 5531khz and from 0700z to 1200z on 12850khz, but they step up or down to other frequencies according to atmospherics and they can be active at any time. It would be much simpler to email you a .wav file. I tried attaching one but .wav is not supported. direction finding is not necessary. I know the country and the general area.

Reading this thread prompted me to try decoding HFDL in Sorcerer, which I started using a couple of days ago. It does a very nice job of decoding and logging transmissions in that mode, even under poor progagation conditions and the high noise level at my location. So far I've only monitored San Francisco, but one exchange showed a weather report and mentioned Ho Chi Minh airport in Vietnam.

This was with my Sangean portable, not an SDR, and with just the whip antenna inside my apartment.
K

Unfortunately Sorcerer uses a hard-coded table to resolve sites that is way out of date. The procedure to fix this is a touch dicey but doable and is described here 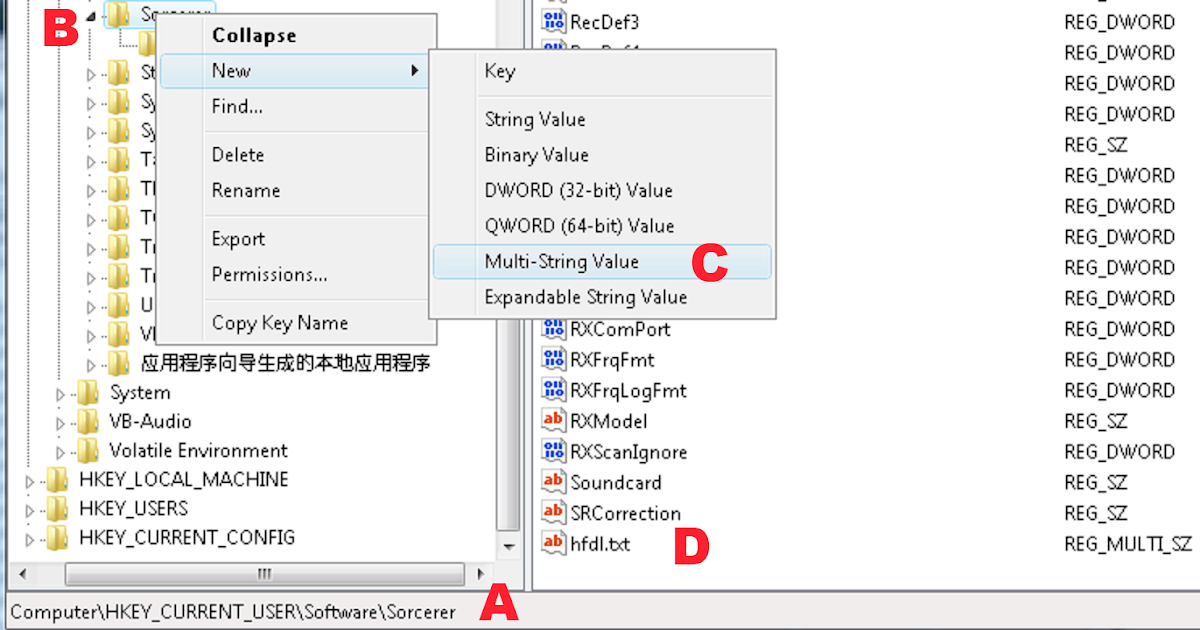 How to display correct HFDL ground stations in Sorcerer

I have noticed some people using Sorcerer to decode HFDL shortwave aircraft messages. Unfortunately, Sorcerer is no longer supported and the...

You can get the latest system table contents from the UDXF website or the HFDL sub group of the ACARS/VDL2 email reflector on groups.io

ka3jjz said:
Unfortunately Sorcerer uses a hard-coded table to resolve sites that is way out of date. The procedure to fix this is a touch dicey but doable and is described here

How to display correct HFDL ground stations in Sorcerer

I have noticed some people using Sorcerer to decode HFDL shortwave aircraft messages. Unfortunately, Sorcerer is no longer supported and the...

You can get the latest system table contents from the UDXF website or the HFDL sub group of the ACARS/VDL2 email reflector on groups.io

Well, that explains why Sorcerer was notifying me every time I switched to HFDL that it couldn't load the ground station names from the registry. There weren't any in the registry! Nevertheless, it correctly identified San Francisco when a transmission came in. I've just added that missing data. Thanks again for your helpful and informative posts -- and as far as I'm concerned, Radio Reference gets a gold star for usefulness.
D

here is spectrogram from today. single tone preamble hard to see here but easy to hear. any thoughts?
K

What was the frequency? If it isn't one of the ones listed in this document, it's not HFDL...

Like GMDSS/DSC, HFDL works on specific frequencies that don't vary or change much, unless a new site is coming online.

here's what they were using three weeks ago.

stanag 4197 don't you think? but I don't have a stanag decoder. anyone want to have a go?
of course I did a lot of searching freq lists and sigidwiki before I came here. If I don't get results soon I will do a data dump and blow the lid off their commsec.
K

Unless you happen to catch them running a test tape (which is usually in the clear), STANAG modes are generally encrypted, so I doubt there would be any hobby level decoder that could decode it with the encryption in place.
You must log in or register to reply here.
Share:
Facebook Twitter Reddit Pinterest Tumblr WhatsApp Email Link
Top