I sure would recommend a SDR unit. With their wide frequency coverage and all mode operation you could really feed that bug nicely. Even the low priced SDR's offer quite a bit. Of course, no radio will be any better than the antenna it has to work with......it's all about the antenna.

Probably not still available, but the Degen 1103 has 'pseudo' analogue tuning although it's a digital radio - has some quirks but mine still works very well after 14 years or so.

majoco said:
Probably not still available, but the Degen 1103 has 'pseudo' analogue tuning although it's a digital radio - has some quirks but mine still works very well after 14 years or so.
Click to expand...

Judging by a review at swling.com, the Degen 1103 looks oddly like the Tecsun R-9012 -- same form factor -- although the Degen has better coverage and a BFO.
W

how about the weather cube ?
just causing trouble.
N

wtp said:
how about the weather cube ?
just causing trouble.
Click to expand...

Trouble or not, I'll take what I can get. As of now I'll go ahead and order a Tecsun PL-360 like I should have in the first place. Any other suggestions as I mentioned earlier would be much appreciated ....... keep in mind I have no idea what a SDR unit is.

Just to bugger things up - go to eBay and search on "radio shack time cube" - there are four for sale there right now...

nohamhere said:
keep in mind I have no idea what a SDR unit is.
Click to expand...

An SDR (Software Defined Radio) is a receiver (some are also transceivers) that use a computer for all the controls of the radio. The unit has no switches or knobs, just a USB port which connects to the computer and some antenna ports. These units can be quite small and run off the power supplied by the USB cable. I have the SDRPlay RSPdx model which I really enjoy due to it's very good performance on the VLF (Very Low Frequency) spectrum. These types of radios are all mode, so you can listen in to AM, FM, SSB (Single Sideband) CW (Morris Code). Assuming you have a computer I would strongly recommend a SDR. If the radio needs to be used in a portable situation then of course it wouldn't be for you.

Below is a picture of the unit I use.

KB4MSZ said:
These types of radios are all mode, so you can listen in to AM, FM, SSB (Single Sideband) CW (Morris Code).
Click to expand...

That's actually Morse code, named after Samuel Morse. Of course, my uncle, who was a ham operator with the last name of Morris, would have been very proud if he were still alive to read your post.

All kidding aside, that's a very informative post about SDRs. I've considered using one too, but my computer already sends too much RFI into either one of my two radios via the audio connection I use when decoding digital signals. I can still decode them, but when I disconnect the cable, down goes the noise floor, and up come signals that I didn't even know were in there. A connection with an SDR would likely make things even worse.
N

kd1sq said:
Just to bugger things up - go to eBay and search on "radio shack time cube" - there are four for sale there right now...
Click to expand...

The answer is "
I'm Sorry but I don,t Know. When you turn it on You do get the Local Government Forcasts.
Last edited: Nov 4, 2020

Here's a site that offers a variety of so-called "atomic clocks", which set themselves to WWV's atomic clock:

Be careful, however, because those clocks are fairly expensive, and there's been some talk about WWVB eventually being taken off the air. That's the WWV transmitter that drives self-setting clocks.

I think the easiest way to set your clock is to update the one on your computer. If you're running Windows, click on the time in the lower right corner of the screen, click on "Change time and date settings", then click on the "Internet time" tab. There you'll see a button labeled "Change settings". You can then synchronize your computer's clock with WWV. After that, the computer's clock should be fairly accurate for several days. Windows automatically synchronizes its clock this way every 7 days, providing you're online when the 7 days are up. Or you can download an app that will let you do it on demand with far fewer steps:

This app is small, fast and easy to use. I've been using it for a couple of years now with no problems at all.

The Degen 1103 is entirely digital - the 'pointer' on the display is a line on an LCD screen which is only marked for the HF broadcast bands - if you tune off the BC bands the pointer disappears.

majoco said:
The Degen 1103 is entirely digital - the 'pointer' on the display is a line on an LCD screen which is only marked for the HF broadcast bands - if you tune off the BC bands the pointer disappears.
Click to expand...

Quite a novel approach! It simulates an old-school dial face, while eliminating the typical problems associated with it, such as frayed or slipping dial cords, etc. How smooth is the tuning dial?

The tuning knob actually doubles as the volume control - depends on you pressing the "vol" button first - but the knob itself is an optical encoder - no gears or bits of string!

Here's a review....not the best but this is one of the newer 1103's with the DSP chip that everyone else seems to be using - my older version doesn't have most of his gripes. 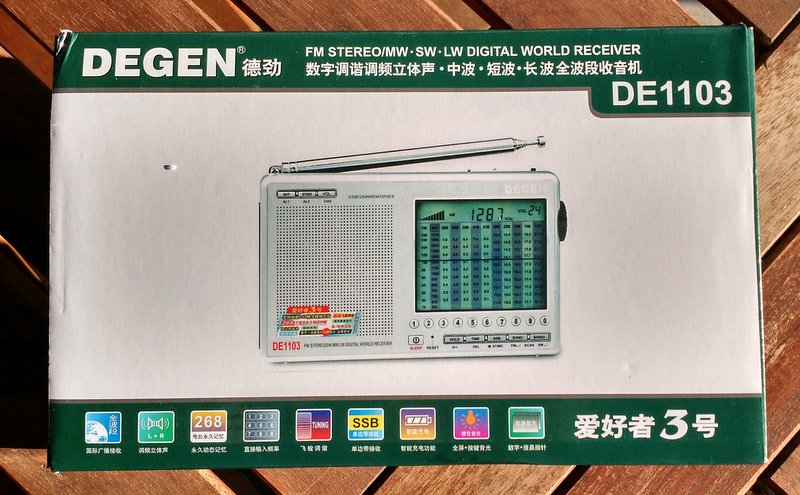 When I discovered that Degen had recently refreshed the receiver design of the DE1103, I was intrigued, to say the least. The original DE1103 sported some serious performance for a sub-$100 receive…
swling.com
N

We seem to be digressing from my original simple question. I've ordered a Tecsun PL-360 and as pointed out should be able to pick up WWV time signal. I appreciate the information. The moderator has been patient with my hanging around, so I will "sign off" ??? before I over stay my welcome.
N

oops ....... here I sit with my new PL-360. I have read the manual ... I have blown the manual up real big on my computer to see it better. Frankly I have no idea what I'm doing. Instructions are not written for a novice. They acknowledge a problem (locked fm) but not how to fix it.

Can someone please talk me through setting up the WWV frequencies and lock them in memory. At this point of frustration I would be happy just having that. It's so bad I can't even find a utube video for the basics.
N

OK, let's assume that you have had the charger plugged in for a couple of days and the little battery symbol at the top left of the display shows that its fully charged. You should only use nickel magnesium hydride batteries (Ni-MH). If you haven't charged the batteries, then you can use any USB charger or plug it in to a running computer - check that it is actually charging - (here we go!) - short press on the "VM" button (lower row in the middle has a battery symbol in red) then a long press on the same button, the display should show "CHA" and the battery symbol will show that it's charging.

So lets go right back to what you want to hear - the WWV time signal. WWV has three useable frequencies, 5000kHz, 10000kHz and 15000kHz and a couple of others that you may or may not hear, 2500kHz and 25000kHz. You haven't said where you are located so I'll just have to guess where you will get the best reception. An easy one to find is the 15.MHz frequency which should work all day in the US. Short press on the "Power" button, it will come up on the last frequency you used. Short press the "VF" to get into frequency mode, the short press on the SW down arrow, the display will show the frequency band top right such as '13mb" - the 13 meter band - keep short pressing the up or down arrow buttons until is shows "19mb" and the frequency should miraculously show 15000kHz! Pull the whip antenna out as far as it will go and turn up the volume thumbwheel a bit until you hear some noise. You should hear the WWV male voice announce the time at 7 seconds before the minute beep and maybe even the female voice from Hawaii at 15 seconds before. No?

If you want to store these frequencies into memory locations, just short press the "MEM" button then quickly rotate the frequency thumbwheel until it says 001 or whatever number you want, then short press "MEM" again. Repeat for the other two frequencies with a different memory number of course. To recall the memories, short press on "VM" and then turn the frequency thumbwheel to the desired memory number - wait for the display to return to normal before rotating the wheel to the next location.

A word of caution about the whip antenna - don't push it down from the top! One slight misalignment and it will bend/break. Pull it down into the case from the bottom thick parts then finally you can push it all home. Don't forget, HF radio is not like your local AM broadcast station, propagation is entirely dependent on the time of day and the atmospheric conditions. OK, that should be enough for todays lesson - let us know how you got on! Have a play with the "MW" or "FM" broadcast bands now that you know how to move around. We may get on to the Auto tuning later!

I've even overheard experienced amateur radio operators saying they couldn't make head or tail out of their new radios. They're getting much too complicated these days, and a clearly written manual is often hard to come by. My new VHF/UHF scanner was hard to figure out at first, too, but it's by Icom, who know how to write good instruction manuals, and I had some help from the folks here on RadioReference.com, as well. The OP will get it eventually if he perseveres.
You must log in or register to reply here.
Share:
Facebook Twitter Reddit Pinterest Tumblr WhatsApp Email Link
Top