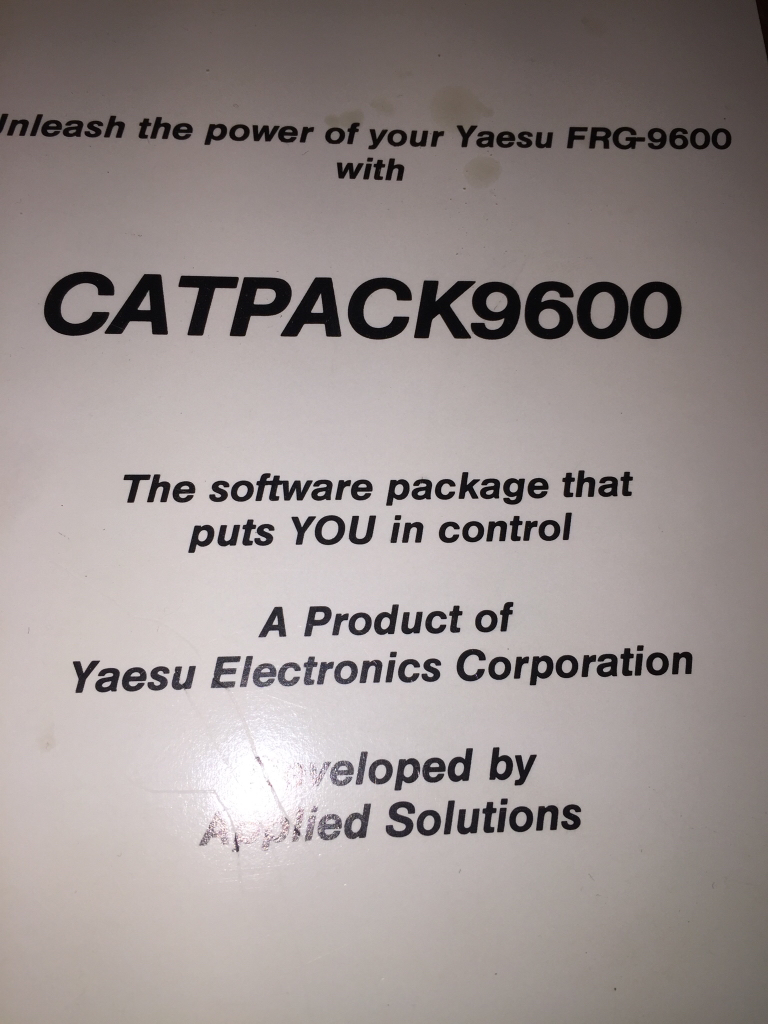 Found this the other day while cleaning.

Umpteen years ago our local radio club (at the time) asked everyone to bring in their scanners for a "show and tell " night and we had a tech from some local place with a whole load of test gear. I had an AOR 2002 at the time which I thought was working pretty well - and it was - on the test bench but quite a few (including mine) couldn't hack the pace when it came to overload, cross-mod and the other tricky stuff. Someone had a 'modified' Icom R7000 that performed very well and beat all the 'cheapies'. When my 2002 packed a sad and took out the front end I bought a used Yaesu VR5000 but that succumbed to the LCD display problem although I can still run it through remote programming. So now I have a used R7000 that was not without it's problems but now runs perfectly and is very sensitive and selective. Heavy tank it is too. Apologies for going OT, I have never owned a 9600 - I don't recall seeing one at the 'show and tell' - a lot of the JIL 400 (?) receivers though.

Location
No Matter Wher You Go, There You Are

Does anyone remember the horribly written manual? Phrases like,"Therefore,
into wall plug the mains.",and "Now on turn the Radio.", were common. I had to
figure out how to run it on my own. It was a decent radio though.
Y

Do I remember the FRG 9600? Of course I do: I still own two of them and took part of my screen name from them! Not a very good radio as a scanner, but for single channel monitoring and near DC to daylight coverage it has few equals IMHO. It's a VERY sensitive receiver (some might say too sensitive), but when I want to hear VHF signals 100-150 miles away it's my go-to radio. A great receiver for monitoring 2 meter SSB and 440 MHz amateur TV as well if you have the video board installed.
C

Found this the other day while cleaning.
Click to expand...

Do you still have this or just have the manual? Was it an interface and software? What's the story on it?
A

Mike --
Do you still have the CATPACK9600 software?
If you do would you please email me the program? I have not used mine it quite some time and I corrupted the program disk.
Thank you in advance.
Alan
AA6DW
aa6dw@arrl.net

I had a 9600 for a week to trial and the week after an AOR2002. I chose the 2002, much more sensitive - I was out in the country so no problems with adjacent channel or cross mod interference - it had a socket on the back for a remote but the software was nowhere to be found.
M

I had a perfect example, always salivating for one from Electronics Equipment Bank,,,EEB I believe in the mags at the time.
That and the FRG 8800, which I both eventually acquired in the middle 90's on that auction site... I recall it somewhat complicated to operate, slow scan speed, cool looking fluorescent display and all the unblocked 800 MHz coverage that was to be had at the time with this radio. Very entertaining. I'm sure I could have experimented more with it.
There were no issues with my example's operational performance. Had I realized all the capability with computer control I might have re-thought selling it, which I did 3-4 years ago, again on that site. If I recall, I believe it brought $200. It did have the factory antenna, manual and power supply. Of course having the manual, I was of aware of the computer control, but that was far from the draw of owning it.
Was indeed a cool factor with it, but my handheld Pro-60, the dinosaur that it is now, suits me much better for a scanner. Oh, and the old FRG-8800 ?, I still have that and it is used nearly nightly, always loved it's cool factor as well. Just wished I heard as much as I used to on it !

I recall wanting one in the worst way. The 9600 was a bunch of radio for the money. The local ham store had one set up on an Apple IIe. I had just bought the new Mac and sold my IIe (big mistake in retrospect).

What great posts about a great part of radio equipment history. Over the years I had two of these radios but sold them eventually for a scanner radio. The 9600 was definitely a fun tabletop radio to own. Only downside was it's inability to cover 30 - 50 MHz. Back then there was still quite a bit of activity on that band.

I have a source code fragment for controlling the YAESU FRG-9600 scanner.
This fragment is translated from the Basic programme listed in the FRG-9600
Service Manual to the C programming language using Turbo C version 1.5.
It may work on other YAESU (C.A.T.) devices with modification (not tested).
If you are interested in 'beta testing' this code please send email.
--
Curtis Spangler {sun,pacbell,uunet,pyramid,amdahl}!hoptoad!cas
N6ECT P.O. Box 170031, San Francisco, California, 94117-0031
"Without love in the dream, It will never come true." J. Garcia / R. Hunter

I had the FRG-9600 when I was stationed at NAS Adak. Bought one from AES in 1988. Used it to monitor frequencies on our base. Think I sold it 1994 on eBay. Also bought the FRG-8800 and used my PK-232 to decode RTTY/SITOR and other HF signals. All from the inside of the barracks.
Z

I've got a couple of FRG-9600s. They serve two main purposes. They're discriminator tapped, so they make a good source for running decoder software, and they work quite well with DSDPlus, Unitrunker, and PDW. They're great for 'spin the dial' access to monitor amateur P25 and DMR, etc. They're also pretty decent for air band monitoring. The one annoyance there is that the squelch doesn't fully mute in AM mode. I use an SSB voice squelch board to handle that.

They show up on eBay now and then, and I wouldn't look down on them too much. They're fun little radios.

What voice squelch board are you using?
Z

mancow said:
What voice squelch board are you using?
Click to expand...

It's the circuit published in 73 magazine in August 1982. There's an article on Repeater Builder about it here:

zz0468 said:
It's the circuit published in 73 magazine in August 1982. There's an article on Repeater Builder about it here:

Not trying to hijack the thread but does it work well?
Z

mancow said:
Not trying to hijack the thread but does it work well?
Click to expand...