I have pared down my shack to the radios I actually use regularly. I found I hadn’t touched a bunch of radios in a long while and decided to cut back to the most used ones. I took out a half dozen scanners, mostly PRO2096’s or analog GRE’s. I tend to prefer the Uniden models, and rarely use the GRE’s except for Pro96Com.

I have a pair of 12VDC power supplies, one is a big-honking Astron 50 amp model used for the transceivers. The other is a smaller Motorola 20 amp model (behind the monitor) that powers the scanners and accessories. This tends to keep the heating effect more manageable. Each power supply is connected to a RigRunner 4012 PowerPoles strip for power distribution. (These are out of view)

There are 3 main scanner antennas. 2 are the RadioShack version of the ScanTenna, each go to a Stridsberg 8-port active multicoupler. These feed most of the scanners except the 996 and GRE’s. These radios are fed by an 800 MHz. vertical going to a 4-port MCA804 800 MHz. multicoupler. The transceivers and R8500 have individual antennas. The IC7000 is connected to a Delta-4 coax switch connected to a variety of antennas, including a couple dipoles, a Slinky and a 4-Band Diamond vertical.

All antennas are in the attic, I live in an HOA so external antennas are not permitted. In the corner behind the desk is a wooden wire chase from the attic to hide the coax. 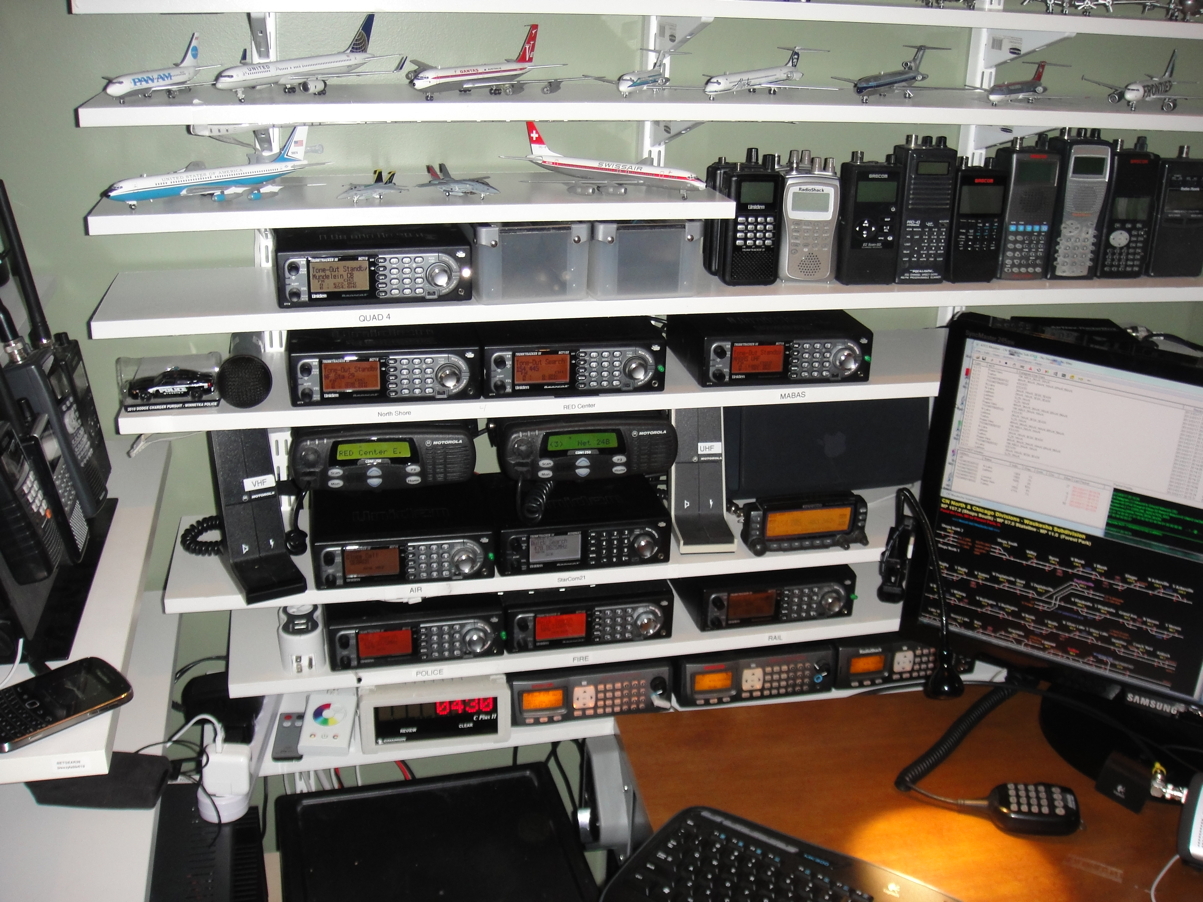 The radio shelves are Elfa from the Container Store. These, by nature of the vertical mounting rails, have a natural space between the shelf and wall just right for wires.

I have some LED strip lighting but it really doesn’t do anything but look cool at night.

A few hints I have learned from shack building over the years is that while short cables for power and antennas are easier to keep neat and tidy, they restrict the ability to pull a radio out for work or rearrangement.

Each of the 3 Multicouplers have been assigned a color and jumpers from that multicoupler have small wire-ties to match. This allows me to tell at a glance which antenna-multicoupler is on what radio in case of issues.

Invariably there are a few wall-warts left. A few radios or devices use something other than 12 VDC so these are accommodated. Other than the Wouxon each of the HT’s use a different voltage and has an individual charger wall wart. In addition the HP1 and MDC decoder use 6 and 5 volts respectively. The computer equipment has several but these are on a separate system thru a UPS that also has space for not-battery surge suppression.

My HH scanners all use AA batteries these days and I have given up on trying to maintain rechargables. I get DuraCells or whatever from Walgreens, CostCo or Sam’s Club when they are on sale and keep a bunch handy in the car, home and work. They are cheap and a lot more convenient than trying to remember to keep them charged.

The antennas and battery packs for the HH scanners are in the small plastic tubs tucked in to the right of the top most BCT15. When I need a HH I grab an antenna and battery and off I go. 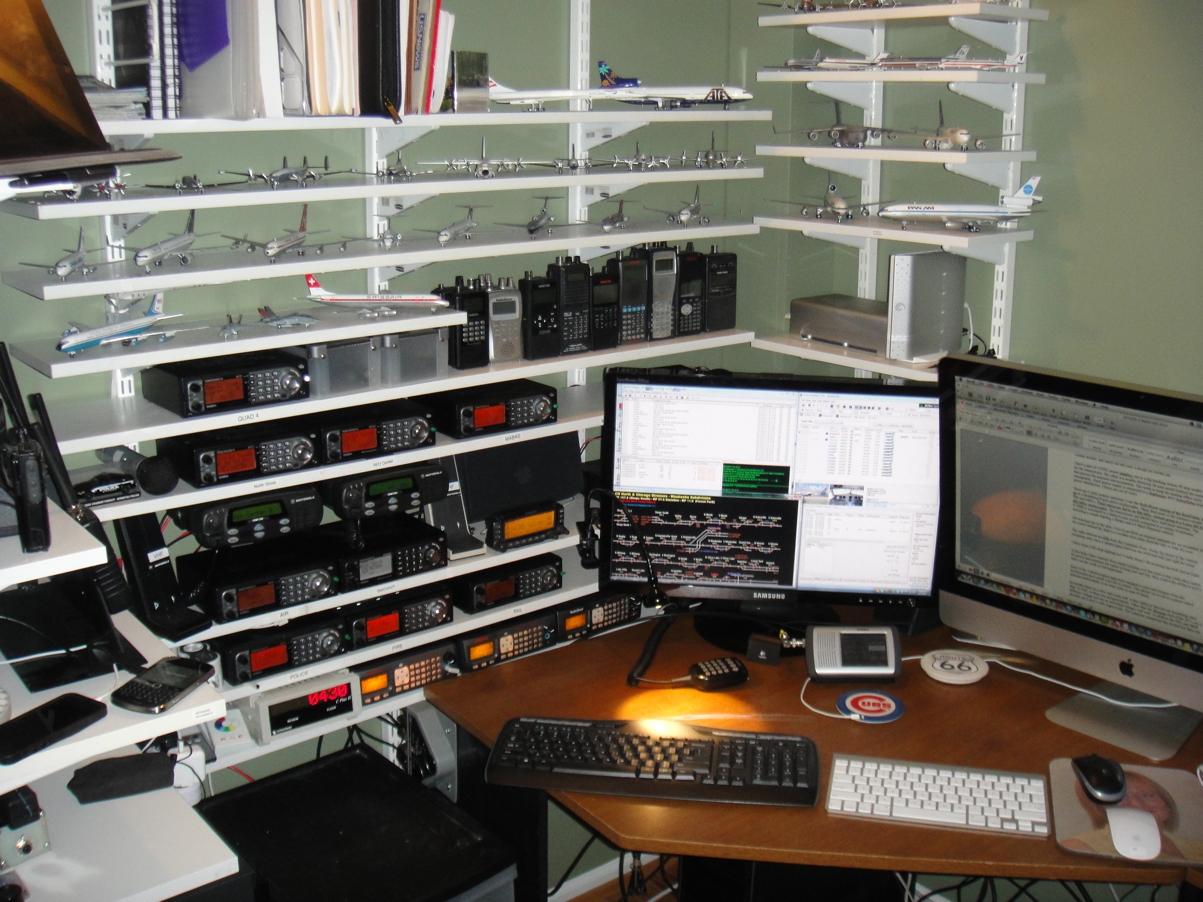 Why so many radios?
I have radios dedicated to a single task for the most part. Some radios are set up for data decoding so I really don’t listen to them at all, the computer does. The Fire Tone Out radios sit on a single channel and stay silent until a call goes out (Thanks Uniden for this!) These replaced my fleet of Plectrons. Others are set up on a set of rail, aircraft, police or fire channels. When that part of me wants to listen in I just diddle the volume to match my mood. 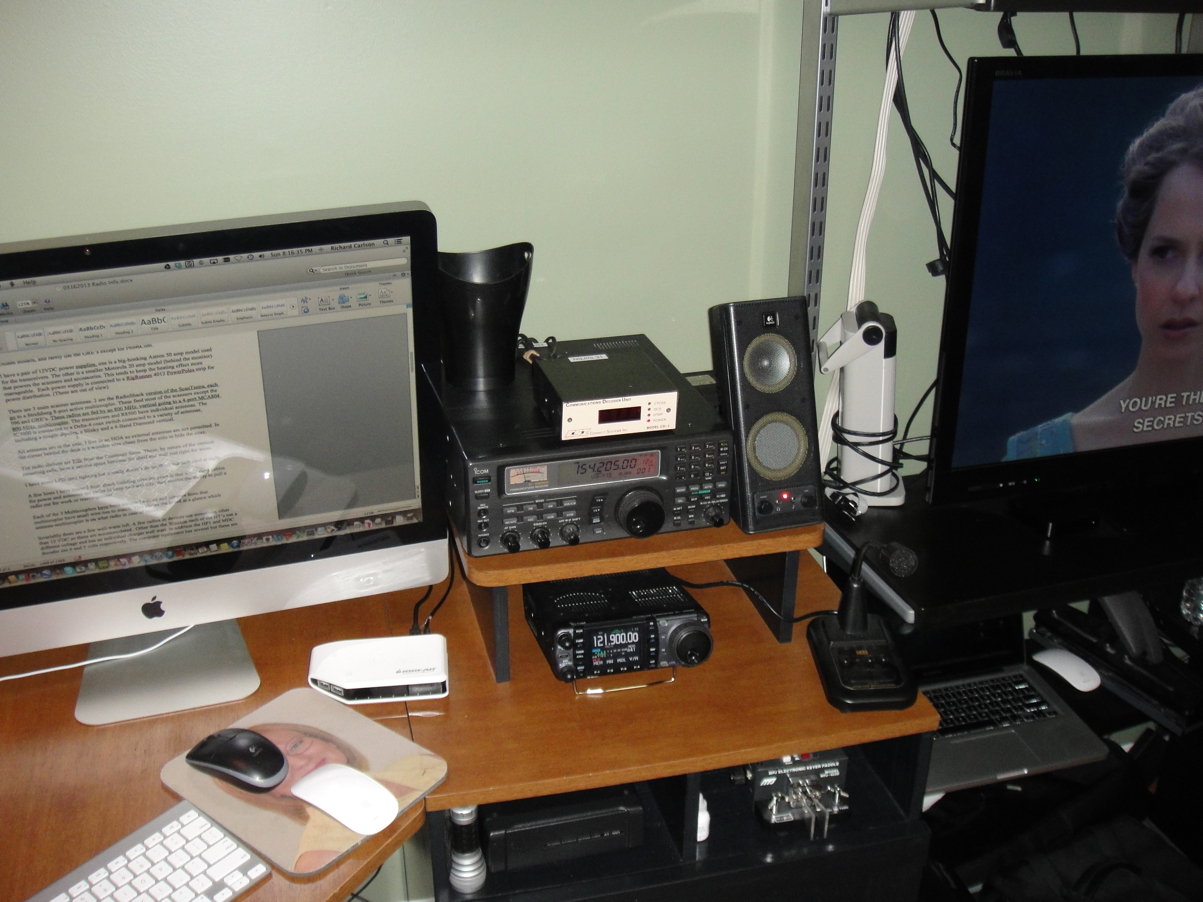 How do I manage to listen to all at once?
This is from years as a dispatcher, firefighter and police officer. I adjust the volume to prioritize the radios I want but can actively monitor several at a time.

What about the wife?
That’s the best part. She is deaf and therefore is not bothered by the radios, even when she is asleep. I can have them on as loud as I want and she could care less. What does get her goat sometimes is flashing lights since this is how she alerts to things like the videophone, doorbell etc. I had to relocate the AirNav box behind the monitor since the LED’s are particularly bright and obnoxiously flashing.

How can you afford all this?
First, I have a good job. Second I have a deal with the wife; I get a certain amount of radio money depending on bills etc. Anything I make by writing assignments or other radio work also goes into this pot. Otherwise she has the right of refusal on major purchases, but she is more than reasonable about it. She has some expensive hobbies herself... We are lucky that we are able to do and buy the things we like but I make sure we get our money’s worth. 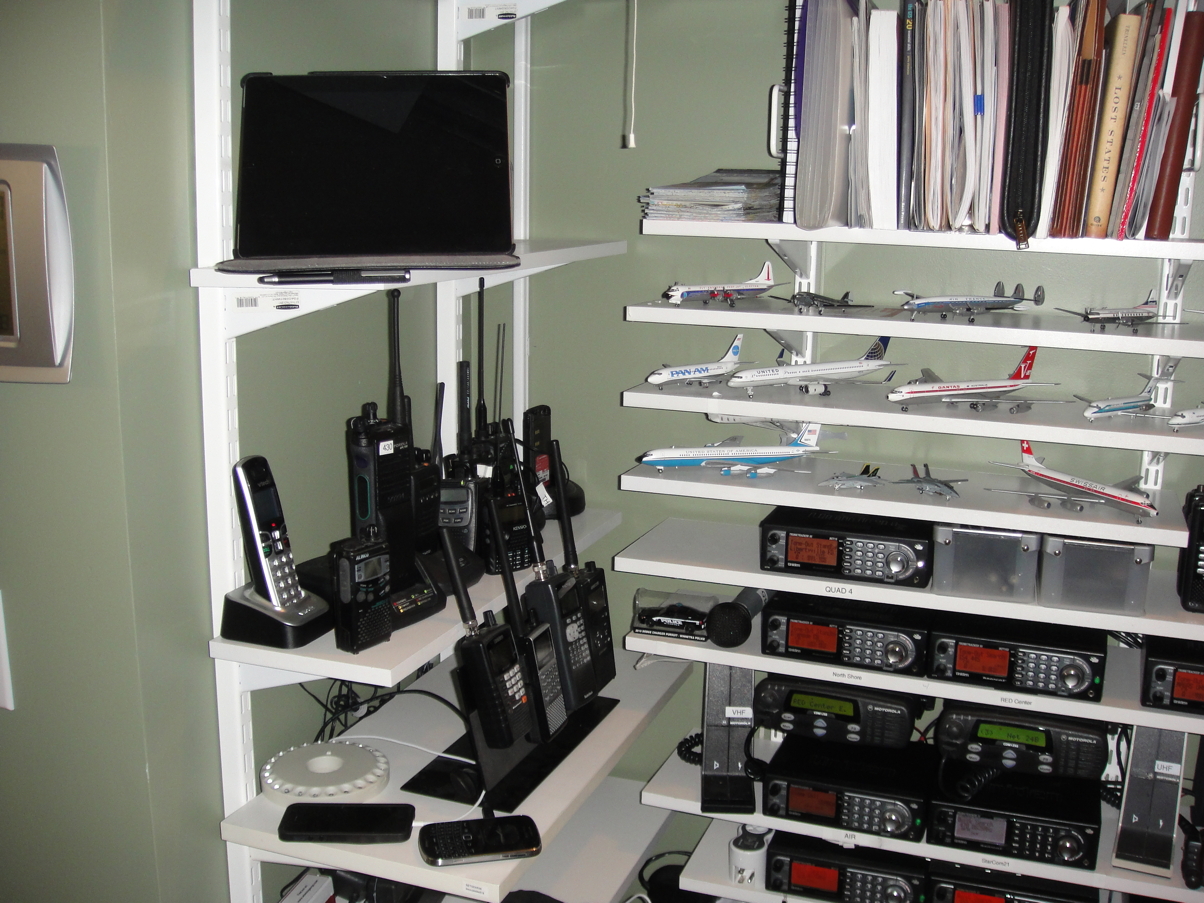 An Astron RS-50A powers the 4 transceivers.
A Motorola 20 amp supply (behind monitor) powers scanners and accessories.
A few items using other than 12 VDC use wall-warts, otherwise all are powered from the 2 DC supplies.

The iMac is my everyday computer for web development, email, communications and web browsing. Above the second monitor is a 4TB RAID and a backup HDD.

Below the desk is an HP computer (i7 3 GHz, 9 GB RAM, Win7P) The left monitor can be used with this or as a second monitor on the iMac (useful when working on web pages!).

The Windows machine is used primarily for running a local receiver/server for ATCS as well as my AirNav RadarBox. I also run a couple copies of PRO96Com on the local P25 systems. I also have ARC products for radio programming.

The MacBook Pro runs any of these applications when I am on the road.

I don’t often use handhelds, many were bought on whims at the time or were from a writing assignment. I use the 396XT most of all when on the go, with the 346 living in my camera bag. The PRO83 has a discriminator tap for the occasional remote decoding application. Most of my handheld use is for railfanning or planewatching or CloseCalling at the mall.

Out in my van I have a batch of radios as well, including an Icom IC7000, Alinco DR-635, a pair of BCD996XT’s and a pair of BCT15X’s. All 4 scanners and the two 2-ways use remote heads, the radios are mounted in the cargo area.

Were you really up at 0430 taking pictures?
S

No, that is an MDC decoder, that was the last radio ID it saw.

Awesome setup. Looks like you've got the spectrum covered!

I got my start in scanning from the CARMA group while growing up in Illinois. You and many others had great info for a new guy.
Thanks!

Color me GREEN with Envy! Now that's what I call a SHACK! I'd love to just sit there and listen. Super job!!! I love the collection
of miniature jets!!!
Last edited: Mar 18, 2013

Location
The State of Confusion

U might want to edit that part . I know what u meant, but it didn't present well. Your wife can read !!!!

Nice setup Rich .. I have always enjoyed your contributions to RR ..I've been to your site and U and your XYL have a good thing ...

Awesome is the only word I can come up with.Thanks for sharing.

That's an incredible set-up! Well done and very neat. Thanks for sharing with us.

I can only come up with one word for your set-up, and that would be, "WOW!!!"

I'm sitting here drooling and my wife, who is looking over my shoulder, is asking me, "is he nuts?" Some people just can't appreciate a few radios (or a few dozen in your case LOL).

Seriously though, that is awesome.

Great setup with a impressive selection of radios. I noticed that some of the BC-15 scanners have an
LED added to the right hand side of the radio front panel. What is the LED for ? COR? ALERT? Thanks for sharing your station on the Forum.

Any chance of getting the antennas in the attic, Rich? I know you had a lot of insulation blown up in the rafters, but would an image be possible?

Yes Bill, they are Carrier activated indications as designed by N1SQB in this thread: http://forums.radioreference.com/uniden-scanners/214811-carrier-indicator-light-uniden-scanners.html

I have done a bunch of my radios with them and will likely do the rest eventually.

what a great great setup, so loving it

I almost wet myself looking at the pictures! Almost..... I am sooo jealous!

Awesome setup! Clean, organized, and running ATCS on the old Wisconsin Central! Who could as for more? lol.
K

Are all those planes to scale with each other?

kd0fqx said:
Are all those planes to scale with each other?
Click to expand...

My fav setup up so far....you must have a 20 amp dedicated circuit for you room. Do you have a back up battery for emergencies ? How are you coupling the antenna(s) ? A pic would be a plus.